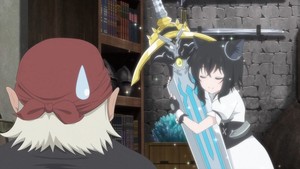 Isekai anime so often these days can feel distinguishable only by their particular, singular gimmicks, usually spelled out right in their title. With respect to that, I have to hand it to Reincarnated as a Sword on a couple of counts: That title declaring its premise is at least mercifully short to type out, and also the series does have more going for it than the idea of whatever unconventional entity its MC got transformed into for this go-around. Yes, the sword known as Teacher’s status as one of nature’s knives is instrumental in the show’s story, but it also seems to be there largely to facilitate the real draw, which is the mutually-beneficial partnership between him and the other lead, the adorable catgirl Fran. Predicating your main character’s engagement with this world specifically on helping someone, as opposed to simply listlessly adventuring through it in vague efforts to acquire strength and material possessions, instills more of an immediate heart in the storytelling.

That’s the feeling that’s present in all of Reincarnated as a Sword‘s best moments so far. Yes, this one makes the same odd choice so many of these shows do of not really informing us of Teacher’s personality and life prior to his unfortunate end, but the writing is still able to get us to engage with him due to how it portrays his interactions with Fran and other elements of the world. Though it probably says more about other isekai series when immediately murdering a slave-trader and freeing his slave comes off as such a distinct, surprising swerve in one of these shows, but I’ll still take it as confirmation that Teacher is a generally cool dude. Let’s hear it for bare minimums!

So with an immediately-interesting setup and dynamic for its characters the question becomes what the actual plot of Reincarnated as a Sword is, and how well it works. And that’s…a bit more contentious at this point. Because at its core, this really is the same sort of “Level up, get stronger, accumulate powers” progression that we so many of those more indistinct isekai interlopers engage in. Yes, it’s driven by the earnest point of Fran wanting to prove the haters wrong and show she’ll be able to achieve that all-important ‘evolution’ for her species, but that’s a far-off qualification at this point for what otherwise amounts to grinding random encounters and perusing places in town.

With that in mind, it’s how Fran and Teacher interact with the world around them that continues to distinguish Reincarnated as a Sword. Proving oneself at the Adventurer’s Guild is a time-honored tradition, sure, but here the pair get to perceive the plight of Nell, the outwardly-polite lady behind the counter there who’s been worn down to aggravated exhaustion from catering to so many other rude, entitled adventurers. At last, a show that understands that even in another world, working in Customer Service is hell. Fran and Teacher winding up on Nell’s good side in the second episode, or them getting on generally well with Garrus, the blacksmith in the third episode, speaks to the more good-natured ideals powering progression in this show: The characters don’t min-max their dealings in any way to acquire great gear in an easy way, they are simply provided good customer service on account of being good customers. It’s heartening in a way this show can be while also reveling in Fran cutting some jerk’s feet off because he was being prejudiced to her.

That’s an edge afforded to this series that could otherwise have its atmosphere of casual power-progression make it feel like something simply akin to BOFURI but with a little more life-and-death stakes. There are consequences and worries awaiting anyone who fucks around and wants to find out in this world, and the third episode makes clear that Teacher and Fran are still far from being your usual overpowered isekai protags. But their struggle is still shown in service of saving some other adventurers from goblins, and going onto potentially protecting a whole town from a stampede of the things. As with Fran’s proving fight in the Guild in the second episode, which gives way to mutual respect between opponents, the best parts of the conflicts in these episodes have those stakes to their storytelling that informs why we’re spending time on it, apart from the fact that watching a cute catgirl cut up some goblins real good does look pretty cool.

Considering that though, it does lead back to the fact that Reincarnated as a Sword still comes off all too susceptible to those hoary old isekai issues. The first half of the opening episode is the most immediate indicator that this will be a problem, an exhausting montage of effectively-meaningless monster battles backed by incessant stat-sheet spreads. It’s why the second half of the episode, showcasing Fran and how Teacher frees her, comes off as that much more of a breath of fresh air. The second episode seems to understand how to better make this work, still including status-viewing as a storytelling device, but graciously skimming over them at a fairly natural pace. But then the problem comes back with a vengeance in the third episode, with too much time spent on Teacher and Garrus discussing the technicalities of sword stats, or Teacher describing the pros and cons of particular healing magic acquisition. It gets to a point where I question the story’s inclusion of a running gag about Fran getting bored and wandering off or falling asleep during these stretches, since if you’re going to acknowledge how uninteresting they are, why not just make an effort to excise them entirely?

That’s the tenuous split between the tones of Reincarnated as a Sword so far. When it’s on, it’s positively refreshing, making it look easy compared to other isekai series how engaging with even the elements of this bog-standard RPG world can be pleasant, and making no excuses for its characters conforming to ‘realistically” unsavory elements like slavery and racism. Alongside that and what have so far been some extremely nicely-animated segments of Fran going to town wielding Teacher, we get the best version of the show. But then, too often so far, it slips into over-explanatory padding mode, or things like a very odd-feeling indulgent sidebar about Fran shopping for underwear. Sometimes it almost feels like the series doesn’t want to stray too far from the expected isekai beats, for fear of alienating that base audience. To which I say, if there are people out there who won’t be able to appreciate the promised future spectacle of a catgirl sky-surfing on a magic sword unless they get pages and pages of text explaining the technicalities of it, maybe this series doesn’t need to bother trying to court them.