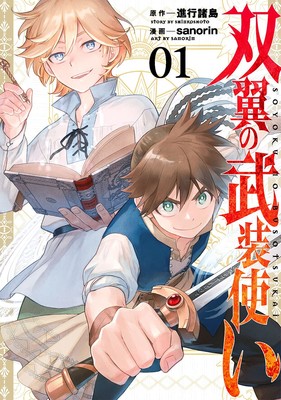 Amazon is listing the third compiled book volume of writer Shinkoshoto and artist sanorin’s Sōyoku no Busō Tsukai (The Winged Weapon Wielder) manga as the final volume. The volume will ship on December 12.

The manga is set in a world that is facing an inevitable end due to a destructive and ever-expanding disaster known as The Eternal Storm. Humanity clings to its only hope in the form of new, unique weapons: Power Weapons. Two brothers set out on a quest to find their own Power Weapon.

Shinkoshoto is the original author of the The Strongest Sage With the Weakest Crest and Tensei Kenja no Isekai Life light novels, both of which inspired television anime adaptations that premiered on January 8 and July 4, respectively. Square Enix Manga & Books publishes the manga adaptations of both novels in English. Comikey also publishes the manga adaptation of Shinkoshoto‘s I Think I’ll Cheat to Become a Spellsword in Another World (Isekai Tensei Shita node Cheat wo Ikashite Mahō Kenshi Yarokoto ni Suru) light novels in English.