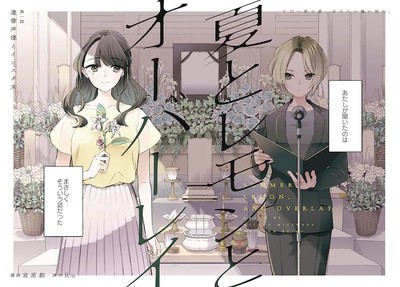 The December issue of Ichijinsha‘s Comic Yuri Hime magazine revealed on Tuesday that Ru and Miyako Miyahara‘s Natsu to Lemon to Overlay manga will end in the magazine’s next issue on November 17.

The manga is an adaptation of Ru’s winning submission to the third Yuri Novel Contest, which took place from November 2020 to January 2021. The manga’s story centers on two women: Yunimaru, a voice actress who ekes out a living between her part-time job and small donations from live streams, and Sayaka Konno, an office worker in a big name company. Yunimaru receives a request from Sayaka to read out her last will at her funeral. Though suspicious, Yunimaru is ultimately swayed by Sayaka’s payment of 500,000 yen.

Miyahara launched the manga in Comic Yuri Hime on April 18.

Miyahara launched the I Can’t Believe I Slept With You! (Ichido Dake Demo, Kōkai Shitemasu.) manga in Kadokawa‘s Monthly Comic Dengeki Daioh magazine in June 2019, and ended it in February 2021 with three volumes. Seven Seas Entertainment is releasing the manga in English, and it published the second volume on June 14.