The official YouTube channel for Tokyo Theater began streaming a new trailer for Kaiketsu Zorori: Lalala♪ Star Tanjō (A Star Is Born, a reference to the American films of the same name), the first new anime film based on Yutaka Hara‘s Kaiketsu Zorori children’s book series in five years, on Tuesday. The trailer previews the song “Audition e Ikō” (Let’s Go to the Audition) by the voice actors for Zorori (Kōichi Yamadera) and Hipopo (Erika Ikuta), and the song “Jishin Manman yo” (Full of Confidence) by Erika Ikuta. 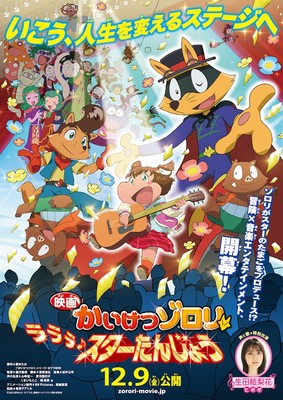 The film will open on December 9.

The film will be based on the 2019 Kaiketsu Zorori: Star Tanjō book, but will have a new take on the story. The story will center on Zorori’s encounter with a girl named Hipopo, who wants to be a star, but is unable to sing for a certain reason.

This will be the first new anime film in the franchise since 2017’s Kaiketsu Zorori: ZZ no Himitsu, and it marks the franchise‘s 35th anniversary.

Bandai Namco Pictures and Ajia-do will again produce the animation. Atsuhiro Tomioka, the main writer for the previous two Kaiketsu Zorori television anime, is returning to pen the film’s script. Kōhei Tanaka, who has composed the music for previous entries in the franchise, is returning to score the film.

Rikako Aikawa, Motoko Kumai, and Yuuki Kaji will return from the earlier television anime as Ishishi, Noshishi, and Beat, respectively.

Hara’s books follow Zorori, a mischievous bandit fox who dreams of becoming the “King of Pranks.” Zorori aims to “build his own castle and make a beautiful princess his wife,” and he embarks on one misadventure after another with his two boar companions Ishishi and Noshishi.

This anime series that premiered in April 2020 was the first television anime of the books in 13 years. The show featured episodes with stories that did not appear in the previous books and adaptations. The anime also featured the new, original character Beat, Zorori’s rival.

The anime’s second series premiered on NHK E-TV in April 2021.