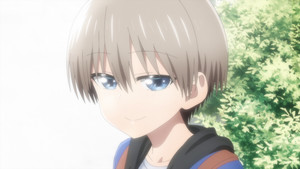 Have you ever had those two friends that always argue with each other but clearly get along better than anyone else? You just want to yell at them to hook up and start dating already, because as far as everybody else is concerned, they are already a couple but somehow also the last ones who got the memo. I feel like that is the perfect summation of what Uzaki-Chan is. It’s not a story about two people fostering chemistry over a period of time; it’s about two people that already have amazing chemistry and now it’s just a matter of waiting for them to be let in on the secret that they’ve been dating all along!

Yes, it gets frustrating at times, and I would even go so far as to say that the show’s biggest weakness is that it spends too much time on running gags that don’t really serve the main relationship at all. For example, the one about Uzaki’s mom constantly misinterpreting everybody’s words to the point where she thinks that Sakurai is secretly planning to dominate her was funny for a bit, but now it just feels uncomfortable. Honestly, the best gags are ones that tie back into the main relationship, like how almost all of the side characters are entertained by the cute antics between our two leads, with some even seeing it as a form of sustenance.

Because of this, I found the third episode the strongest, because it had the most consistent build-up to what felt like an actual emotional revelation that was arguably missing from the first season. The tricky thing about situations like this is that it’s usually better and healthier for two people to come to certain conclusions on their own. This seems to be the justification for why their friends will put them in situations without directly confronting them about the feelings they might have for each other. However, I like that this season is at least opening with an acknowledgment that there are two defining character flaws that are getting in the way of that romantic realization.

I would argue that most of the stalling is Uzaki’s fault because her antics sometimes cloud Sakurai’s opinion of her with anger and frustration, even though it’s pretty clear deep down that he appreciates and respects her. Don’t get me wrong, he is dense and earnest to a fault, but she definitely doesn’t help the situation. Uzaki, on the other hand, has way too much pride in herself. She sees herself as the one that’s mostly in charge in their interactions and the one that sets the pace. She constantly frames the time she spent with Sakurai as her doing him a favor even though it’s pretty clear to the audience that it’s just an excuse. However, the beginning of this season shows that it’s also an excuse that she is telling herself. The mental gymnastics that she is going through to justify not confessing to Sakurai or at the very least entertain the possibility of them being very compatible is probably one of the most interesting things of the entire series so far. We’ve had more than enough comedy and setup in the first season, so I hope that moving forward, Uzaki-chan going to take some of this more interesting character introspection and actually go somewhere with them.

Uzaki-chan Wants to Hang Out! Season 2 is currently streaming on
Crunchyroll.