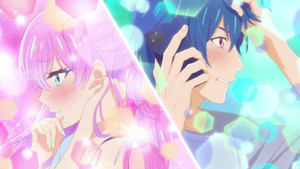 More Than a Married Couple, But Not Lovers seems relatively straightforward at first glance, featuring a classic love triangle between a hesitant protagonist, his childhood friend, and this new, radical woman that got introduced into his life that likes to put on appearances. The question is what gimmick does this show have to build up that lovely romantic tension and act as the catalyst for comedic hijinks? Well it apparently takes place in a world where marriage practice is a mandatory part of a student’s curriculum, and students are graded on how affectionate of a couple they make with their assigned partners.

This setup has a lot of red flags, but to More Than a Married Couple‘s credit, it kind of opens with this “yeah this is kind of weird but just go with it” mentality. The whole idea of two adolescents being constantly observed and graded on their domestic performance feels kind of Orwellian, and it gets weirder when you realize that most of the fan service or romantically-charged moments in this show are likely being recorded on camera by what I can only assume is a group of teachers with a pen and clipboard. There are also a lot of logistical things that just sort of nagged me throughout these two episodes, like the power outage in episode two that put our two leads in a compromising position. I initially thought this was simply a situation contrived to allow them to act without being observed by their teachers, but when their grades went up based on their behavior, it just made me think about the circuitry of the place they were living in where a power outage would only cut off the lights but not any of the other devices that are being used to observe them in the room. I’m no electrician, but that just seems odd.

All that said, I would be lying if I said that I didn’t get swept up in those romantic moments more than I was expecting to. There’s just something about the presentation of the show and the purity of our three protagonists that feels surprisingly wholesome despite the fact that there are a plethora of camera angles that would make you think otherwise. Sure, More Than a Married Couple is leaning very heavily into the melodrama of character misunderstandings to drag things out longer than they probably should, but it kind of gets away with it since it’s establishing that the three pillars of our love triangle are so wrapped up in their own insecurities and weaknesses that they can’t really see anything beyond that. Maybe that’s why I found it so relatable, because underneath its mountain of contrivances is a decent amount of heart that is just prevalent enough to get me by. Will that heart persevere throughout the rest of the series or will all of those little things keep eating away at me until the ball is dropped? We’re just gonna have to wait and see.

More Than a Married Couple, But Not Lovers is currently streaming on
Crunchyroll. Is This Love Flops Character Russian or Bulgarian? – Interest Anime