How would you rate episode 1 of
BLUELOCK ?

How would you rate episode 2 of
BLUELOCK ? 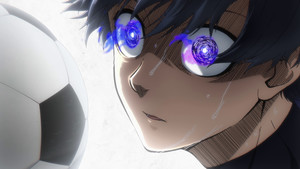 The only thing I knew about this show was that it was adapted from a sports manga with a pretty sizable fanbase. I love sports manga/anime because in a lot of ways they exemplify the perfect encapsulation of the classic underdog story. Seeing a single person or a whole team come together, overcoming personal differences while discovering new abilities that can help them gain an edge over those clearly better than them is always fun to watch. At their best, they can even be downright inspiring, and I’m so happy that we’re past the era where we would be lucky to get one sports anime a year. So with all that said, BLUELOCK fucking terrified me.

This show is the antithesis of almost every sports anime that I think I’ve seen. In fact, I would even go so far as to say that it’s setting itself up like the origin story of the asshole rival that you see in all of those classic sports anime. You know the overly creepy and competitive rivals who have this dark sinister aura and leitmotif associated with them? The ones who will break your kneecaps in your sleep if it means they can score one more point over you? Yeah apparently this show is set in an institution that’s designed to foster one of those people and its execution kind of shakes me to my very core. The first episode literally ends with the stand-in for the kind, noble sports protagonist getting betrayed and beaten down.

I felt so uncomfortable watching this premiere but make no mistake, that is probably the highest praise I can give BLUELOCK so far. I think this show wants to disturb you. I think the show wants to draw you in by antagonizing you and making you feel that dark hole in the pit of your stomach. When that creepy lanky guy on stage is talking to all the players, that’s the show doing the same thing to the audience basically. All of this is punctuated by incredible presentation and sound design. Just two episodes in and this is probably one of the best-looking sports anime I’ve ever seen. It’s sleek style with dark shading and sharp angles combined with exaggerated body proportions just makes everything come off with such an unnerving vibe. I’ve never seen so much passion poured into something so openly pretentious and cynical.

I can see why this series has garnered the fanbase that it does and why other people seem to be just as caught off guard as I am by its premiere. This is a show that’s clearly trying to be different from the norm by going all the way to the opposite extreme and I got to give it respect for that. The question is, will it be able to maintain the same frenetic energy and amazing presentation across the season? I genuinely do not know since I can only go off of what I’ve seen so far. Let’s all descend down this rabbit hole of madness together!

BLUELOCK is currently streaming on
Crunchyroll.