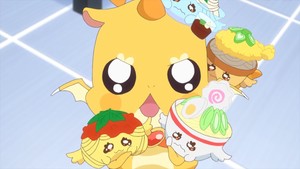 This episode of Delicious Party Pretty Cure seems more interested in deepening the world-building than advancing the plot, and that’s not necessarily a bad thing. Up until this point we haven’t seen much of what Mem Mem and Pam Pam actually do, and Kome Kome’s ability to power up the girls is also a recent development. Learning that each fairy is associated with a specific food category may be something that we could have easily inferred, but it is a good thing to establish, and it gives Mem Mem in particular a special ability that allows the little dragon to be more than cosmetically cute.

We also get a firmer idea of how the Cures powers actually function, which, while not strictly necessary, does make the entire setup feel more solid. Other classic magical girl shows (and the obligatory reminder that that term refers to magical girl shows aimed at a child audience) have traditionally allowed us to see how powers and power sources relate to each other: in Pretty Guardian Sailor Moon they’re based on the Greco-Roman mythology of each planet’s namesake god, in Prétear powers are rooted in the associated element of whichever guy Himeno’s transforming with, and so on. While we could guess that’s the same here, there’s a big difference between making an assumption and actually seeing it play out, so when Mem Mem uses up too much power scrying in leftover udon broth, he can’t sufficiently power Cure Yum-Yum’s attacks. And that means that Yum-Yum has to get creative.

Honestly, if any of the four Cures was going to be put in that position, Yum-Yum’s the one who would probably succeed the best. Ran is a creative person in general, and as the oldest sibling who appears to spend a lot of time taking care of her younger brother and sister, she’s doubtless got experience in problem-solving. She’s also fairly empathetic – sure, she can be brash, but there’s a warmth to her personality that sometimes is masked by her astounding amounts of enthusiasm, and those two traits combine particularly well this week to allow her to operate at half (or maybe even a quarter) power during the battle.

The other major piece of world-building that we get is the fact that the Recipipi do more than just provide flavor or solidity to a food. When all of the noodle Recipipi start crying, it affects the noodle dishes they represent, turning them all soggy. That opens up some interesting ideas about how food functions in the series’ world. If a Recipipi gets a fever, are dishes too hot? Does food poisoning occur when they get sick? All of that would certainly explain why fairies like Kome Kome, Mem Mem, and Pam Pam exist; keeping Recipipi healthy and happy is the basis of the entire food world. While all of this could have been explained earlier, and perhaps should have been, it’s still neat information to have, and it really does help solidify the whole series.

It looks like Amane is the star of the next episode, and given that these past two weeks have focused on establishing more of the story’s background information, it will be interesting to see if we learn more about how she came to spend time as Gentlu – and if Narcistoru is going to be redeemed. There’s no guarantee that either of these things will be covered, but it would make narrative sense with the way that the series has been unfolding.