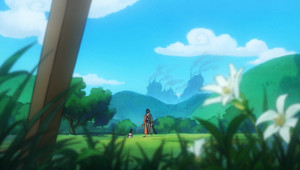 One Piece 1036 leverages Luffy’s sinking beneath the waves to its utmost advantage. Without Luffy and Kaido battling on the top of the world, there is more space to give other characters a chance to shine.

It’s great seeing the Toei team let loose on some of the supporting characters and their big moments. Izo and Kappa both get tremendously cool action sequences, which feels like a special treat. It’s not uncommon to see them get a moment during an episode where everyone gets to show off one cool attack in a big rotation, but here it’s nice just seeing two relatively important side characters get to show off. It still has the same problem many fights have in Wano in that it’s not entirely clear where they are other than vaguely running around wiping out goons on Onigashima, but it looks great and there’s some stylish direction at play so it’s a big success.

Kinemon and Momonosuke’s relationship takes center stage for the rest of the episode and boy does it deliver. It’s easy to forget that these two have been with us since Punk Hazard, an arc that might as well have happened a lifetime ago, and Oda has clearly been building to this moment for a long time. Really reflecting on the emotional impact of Kinemon “faking” being Momnosuke’s father is a smart choice. It really hits home how far they’ve come, what all they’ve been through, and that Kinemon has been Momo’s surrogate father for more than just protection. Kinemon is willing to give up everything fro Momonosuke and Wano, and the crushing finality of Kaido defeating him hits like a mac truck.

Also there’s lots of very “welp lmao that’s One Piece” fighting in this episode. Sanjia cooks up a batch of rotisserie kicken and smacks a punk rock brontosaurus in the cheek to helicopter his neck around and deflect a shower of Perorin’s licky candy arrows all while holding Zoro in his snoozy cruciform cocoon. It’s over the top cool guy stuff, and looks great all the while. It also helps underscore that Luffy’s crew never lose hope despite how dire things get – and when Momo gives his speech through tears to rally the samurai, the Straw Hats are still good to go.

One Piece is currently streaming on
Crunchyroll and Funimation.com.