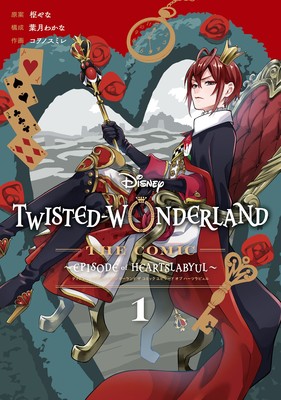 As the previous Disney Twisted-Wonderland The Comic: Episode of Heartslabyul manga (seen right) centered on the titular Heartslabyul dormitory in the story, the new manga will focus on the students of the Savanaclaw dormitory.

Disney Twisted-Wonderland The Comic: Episode of Heartslabyul also ended with the November issue on Tuesday. The manga’s fourth and final volume will ship on December 27. Wakana Hazuki and Sumire Kowono launched the manga in Monthly G Fantasy in March 2021.

The game launched in Japan in March 2020, and launched in the United States and Canada on January 20 for iOS and Android devices.

The game centers around characters inspired by villains from Disney films, and is described as a “villains academy adventure game” that has rhythm game elements and battles.

Night Ravens College has seven dormitories. The characters for each dormitory are inspired by different Disney works, including Alice in Wonderland, The Little Mermaid, Aladdin, Snow White, Hercules, The Lion King, and Sleeping Beauty.

The Disney+ subscription service announced in October 2021 that the game is inspiring an anime adaptation project.