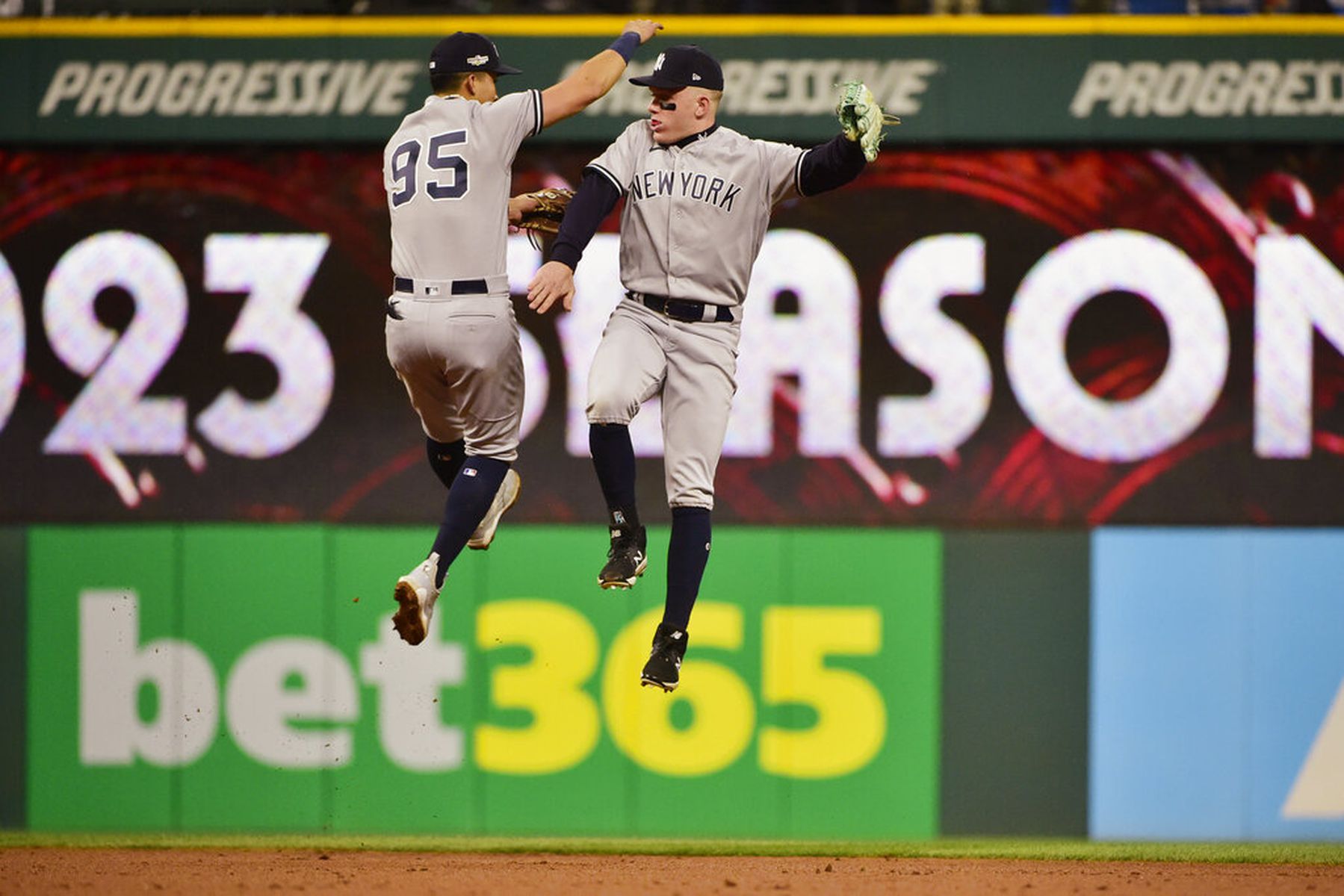 The New York Yankees host the Cleveland Guardians in Game 5 of an MLB 2022 American League Division Series Monday, October 17, at Yankee Stadium in New York. The game will be live streamed on Sling.

Jameson Taillon gets the start on the mound in Game 4 for the Yankees, vs. fellow right-hander Aaron Civale for the Guardians. The best-of-5 series is tied 2-2 after New York beat Cleveland 4-2 in Game 4 on Sunday.

The Yankees vs. Guardians Game 5 starts at 6:07 p.m. Central (7:07 p.m. Eastern) and will be live streamed on live streamed on Sling, which is offering 50% off for the first month and $35 per month for every month afterward. TBS will broadcast the game nationally.

For the second night in a row, the only playoff game on the schedule features the New York Yankees facing the Cleveland Guardians.

This time, it’s Game 5 at Yankee Stadium to decide their American League Division Series after New York staved off elimination Sunday, tying the series 2-all with a 4-2 victory in Cleveland behind $324 million ace Gerrit Cole.

Aaron Civale (5-6, 4.92 ERA) starts for the Guardians, his first career postseason appearance. Jameson Taillon (14-5, 3.91) goes for the Yankees after taking the Game 2 loss in a playoff debut that marked his first major league relief outing.

Taillon allowed two runs and three hits without getting an out. Civale hasn’t pitched since Oct. 5, but he’s won his last three starts with a 3.18 ERA. The right-hander was on the injured list three times this season.

The winner heads to Houston for Game 1 of the best-of-seven AL Championship Series on Wednesday night against Justin Verlander and the rested Astros.

Houston reached its sixth straight ALCS by completing a three-game Division Series sweep of Seattle when rookie Jeremy Peña homered in the 18th inning Saturday for a marathon 1-0 win over the Mariners.

AL West champion Houston (106-56) went 4-3 against the Guardians this season and 5-2 versus the Yankees.

With a history of postseason heartbreak, Cleveland teams are 1-7 in winner-take-all games — losing their last seven.

The young Guardians are trying to end Major League Baseball’s longest current World Series championship drought in their first year after a franchise name change. Cleveland hasn’t won it all since 1948.

Here’s what else to know about the MLB playoffs Monday:

The San Diego Padres haven’t reached the World Series since 1998. The Philadelphia Phillies haven’t made it since 2009.

One of them is going to the final round this year.

The all-wild card matchup of Philadelphia and San Diego in the NL Championship Series features two teams that have known mostly losing in recent years. The Phillies are in the postseason for the first time since 2011, and the Padres are making the franchise’s third-ever NLCS appearance.

“This is what the city’s been waiting for for a long time,” San Diego slugger Manny Machado said.

Game 1 is Tuesday at Petco Park. Zack Wheeler is expected to start for Philadelphia, and Yu Darvish takes the mound for San Diego.

The Phillies went 4-3 against the Padres this season, last meeting on June 26.

“I don’t think any of us are shocked about where we are,” Phillies slugger Bryce Harper said. “We’re really excited about the opportunity ahead for us, and we’ve taken every opportunity and tried to go with that. And we’re just all excited as a club and a group that we can go out to the West Coast and play.”

Aaron Judge and Giancarlo Stanton are the biggest sluggers in the New York Yankees’ power-packed lineup. But who knew the Cleveland Guardians would have such a hard time keeping Harrison Bader in the ballpark?

Bader hit his third homer of the AL Division Series for his hometown Yankees on Sunday night, an early two-run shot that gave them a 3-0 lead on the way to a 4-2 victory in Game 4.

Bader’s first three postseason homers have been his first three long balls with the Yankees. They acquired him from St. Louis in a surprising deal for starting pitcher Jordan Montgomery at the Aug. 2 trade deadline, but the Gold Glove center fielder didn’t make his New York debut until Sept. 20 because of a foot injury.

“To be able to do it in a Yankees uniform is definitely sweet, no doubt about it,” Bader said.

“Every day I wake up, it feels good to be a Yankee,” he said.

Bader’s three homers in the series are his three longest this season.

Both managers are expected to empty their bullpens in the Division Series finale between the Guardians and Yankees, though Cleveland’s top relievers are probably fresher.

New York’s depleted bullpen blew Game 3 on Saturday, when the Guardians became the first team in 168 postseason games to overcome a multi-run deficit in the ninth inning and beat the Yankees.

Cleveland manager Terry Francona is confident Civale will pitch well, and after that he’s got Trevor Stephan, James Karinchak and All-Star closer Emmanuel Clase — his top three relievers — all rested and ready. Small Details You Missed In Interview With The Vampire Latest News