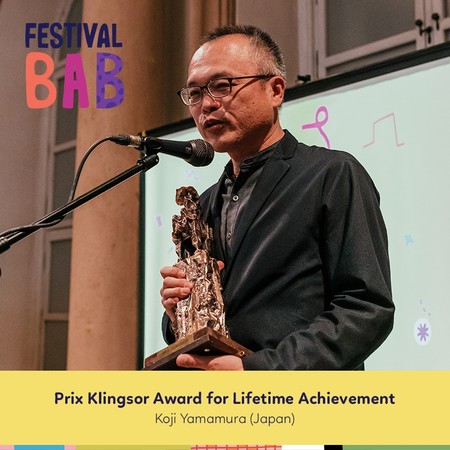 The 16th Biennial of Animation Bratislava event in Slovakia awarded animator Koji Yamamura the Prix Klingsor, a lifetime achievement award presented to “a significant personality whose works perfectly connect artistic and film qualities and reach children’s viewers, on October 9. The event was held from October 3-9.

The Biennial of Animation Bratislava Committee had previously awarded Yamamura with the Albín Brunovský Honorary Medal, which is “given to fllmmakers from Slovakia and abroad for their extraordinary artistic and expert contribution to the field of animation,” in 2008.

Yamamura is a professor at Tokyo University of the Arts’ Graduate School of Film and New Media, and an independent animator best known for his short films. He received an Academy Award nod in 2003 for his short “Mt. Head,” although he did not win.

Yamamura’s other award-winning and nominated shorts include “Muybridge’s Strings,” “A Country Doctor,” “Satie’s Parade,” and “Notes on Monstropedia.” Yamamura himself received the Kawakita Award in 2012.