How would you rate episode 12 of
FUUTO PI ? 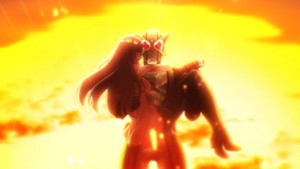 While I assessed last week that FUUTO PI was symbolically circling back to its beginnings for its finish here, I couldn’t really predict how complete a loop that would end up being. It’s clear now that the show is intended as an effective prologue to itself, with the conflict with Bando’s group of Memory users just barely getting started and the pasts of both Tokime and the Kamen Riders at last explicitly opening up to each other. It’s a fair enough pitch for a project like this, effectively ending by acknowledging the myriad other media involved in its genesis, and it even finds a decent wrapping point for its own story as well. Sure, someone who started with the FUUTO PI anime absolutely isn’t getting the full picture, and they know it, but the explosive good time we all had along the way was fun enough, wasn’t it?

Obviously, most of the direct entertainment value is going to come from tying up the mysteries of Reactor and putting him down. There’s definitely a perfunctoriness in how we get there, as everyone from Rentaro to Reactor to Philip take turns just dumping out explanations for things like the purpose of the valve or how the villain was able to be tracked down. It’s a central tenet of mystery storytelling, of course, showing how any of the dangling threads could be ‘solved’, but so much of this info is basically just extrapolations on things we’d mostly figured out by now. The more pertinent points are how they relate to the characters, like everything about Reactor’s cooling-center construction speaking to his personal pride and ambition to assist Bando, or Philip demonstrating how far his empathetic elements have come just over the course of this series. The latter makes for a neat arc to recognize as we reflect on the show overall, even somewhat excusing that shallow conflict with Shotaro I was so unfond of at the beginning of the anime. See, it was thematic the whole time!

The character I’m most honed in on here, however, is of course Tokime. She continues to make an incredibly strong impression at the beginning of this episode, finally feeling like she’s fully stepped into a starring role here at the climax. The revelations of Rentaro’s own dark past regrets provide an effective device to reflect on her own anxieties about her associations with the Shadow Fuuto crew. Seeing Tokime get truly fired up about her client-protecting private investigator efforts is adorable, and thematically it aligns pretty well to hear her declare “We can’t let our pasts beat us!” when the calling of the past is such a central tenet of FUUTO PI, Kamen Rider W, and indeed, Kamen Rider as a franchise overall. That resolution, and how it’s rewarded with Shotaro and Philip’s trust in her, makes for a more satisfying functional finish than any amount of explanatory infodumps.

That does also mean it’s more than a little disappointing that Tokime’s contribution to the actual ‘battle’ part of the final battle can’t be more direct. It’s understandable from how the story has structured itself up to this point: Her GaiaMemory is still non-functional, and we find out by the end of this episode that it might not have really been ‘hers’ in the first place. They’re building to something else with that, and I can respect the approach. But to simply have Tokime get taken hostage by Reactor at the very end as a mere final fight complication reads as an all too shallow usage of her character and how far she’s come. They try to do something a little deeper with it, making the moment about the mutual faith she and the two-in-one detective have in each other, but it still comes off as too easy a tack. They couldn’t let her get in one more attack with her Stag Phone, or even get to combine that with one of W’s weapons for some new finisher, rather than just recreating the original show’s ultimate move? I’m just saying, there were options here, and I don’t know that they chose the best one.

The rest of the fight is a suitably epic finish for FUUTO PI, don’t get me wrong. Talk about going back to the beginning, they even bring back Accel’s Gunner A from the old show, an accessory that even a certified Kamen Rider W obsessive like myself has admittedly kinda forgotten about after all this time. Perhaps Reactor himself doesn’t feel quite as directly relevant as a final boss in the context of this series, but he puts on one hell of a show, resulting in a literally explosive finale that definitely turns things up in a way only an anime adaptation of a tokusatsu series could. I may think having to rescue Tokime at the last second isn’t the best writing choice at the end, but I’m also not going to argue that the sunset-backed shots of W’s Prism Xtreme kick while carrying her doesn’t look plenty cool.

If references to W’s final fight with Utopia at the end of the original series or the return of one of Accel’s old toys isn’t enough formative franchise fanservice for you, then FUUTO PI has you covered even further in the notes it chooses to end on. And in this case, I can see what they’re doing, but I do question how muddled the execution might come off to other viewers. The scattered references to a few remaining plot threads from the old show (including the elusive Foundation X in what’s sure to be an absolute “Holy Shit” moment for long-time fans) work as general plot hooks. And Tokime, new-audience surrogate as she’s always been, provides an interesting springboard at the end by asking for the full rundown of W’s story, starting with ‘Begins Night’, the flashback that opened both FUUTO PI and Kamen Rider W. Just as all the other dangling plot threads for this season are intended to drive viewers to seek out the manga to continue the story, Shotaro inviting Tokime to tell her of his and Philip’s pasts presents a unique invitation to the anime-only viewers, effectively saying to them, “While you wait to see if we get more episodes of this anime, here’s a point where you could go back and watch the original tokusatsu show for all the establishing context”. As a meta-narrative device, it’s honestly pretty clever.

There’s a deep final irony then, to FUUTO PI thus still being the only piece of the Kamen Rider W puzzle officially available in the west. I was halfway expecting this anime ending to be punctuated with a surprise announcement that the original show was going to be uploaded for streaming to Crunchyroll, but alas, they couldn’t be that on the ball. And even with the audience-enticing gimmick, it still leaves the series on a tonally-odd, awkwardly-paced finish for all this. It’s not really enough to mar my overall experience with FUUTO PI; this has been a delightful novelty of a project to follow, and you know I hope we get more of it someday (or at least a domestic release of the manga). It’s just that this odd little ending only drives home how much this thing is just a small portion of a bigger picture, cementing how it was perfectly fun to follow on its own, but never truly stood that way. As Rider shows are so often advertisements for toys and the like, FUUTO PI‘s most apparent shortcoming was in feeling like an advertisement for itself in many moments, least of all at the very end here.