How would you rate episode 11 of
FUUTO PI ? 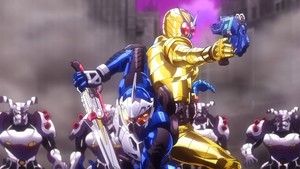 Even with its extremely episodic storytelling, it feels like FUUTO PI has come pretty far by this penultimate episode for its season. It’s represented in simple terms, like the Road Dopant, the first enemy fought in the series, being brought back as a mass-produced mook for our heroes to take on at this stage. And it’s shown in aside symbolism, like Shotaro and Terui’s ejection from Shadow Fuuto sending them back to the docks where Shotaro was snapping selfies all the way back at the beginning of this show. Circles are closing, characters are coming around on their journeys, and I can only hope we really will be in a situation where nothing can ever be the same again, in some way, by the time all this wraps up.

The main indicator of this, expectedly, is Tokime. She hardly gets all the action this week, since most of the first half of the episode is still taken up by a massive melee starring Kamen Riders W and Accel, but she’s certainly not inactive either. Also I’m sure I’m not the only one hoping Tokime will pull off her own henshin at some point in the story, and I know I probably could look up future developments as foretold by the manga, but hey, spoilers. At least she gets in a cool shot on some enemies with her Stag Phone at the end here. No, the primary point for Tokime is that even as Shotaro and Philip are working on rescuing her from Shadow Fuuto, she’s not doing a terrible job rescuing herself, along with the revealed-to-be-alive Rentaro, proving herself as a strong, principled detective-in-training.

It’s not smooth getting there, of course. The main hindrance Tokime’s dealing with in this episode is the boy behind the Brachiosaurus Dopant revealed at the end of last week’s episode. The kid turns out to be a real piece of work, subjecting Tokime to a leering, mind-controlled striptease that’s absolutely the most uncomfortable thing FUUTO PI has depicted in its pursuit of producing Kamen Rider for grown-ups. The thankful part is that Tokime actually manages to de-damsel herself in the situation, seemingly deploying her own flavor of mind-control eyes on the Brachio brat and making her escape, but there’s still something of a grating gratuitousness to it. Tokime’s predilection for fanservice shenanigans works better when they’re cheeky and fun, rather than cruel and tragic.

That said, I understand the intent behind this kind of portrayal. Between Brachiosaurus Boy’s attitude and what our Riders learn from the Reactor Dopant about their usage of Road and Shadow Fuuto, everything’s being laid out to make this new group of villains really come off as reprehensible as possible. They’re a gang of blatant sadists who have been surreptitiously chowing down on citizens in order to expand their criminal enterprise! Ordinarily this sort of thing is just in service of making it all more satisfying for our heroes to beat up these bad guys, but in this case it also serves the purpose of complexifying Tokime’s internal portrayal. If she really used to be comrades with villains of this caliber, what does that say about her as a person? What does it say about her worthiness of being the type of caring, helpful detective she’s currently striving to be?

Kamen Rider of course has always been about the idea that someone can come from ostensibly villainous origins and still, immediately if they so wish, set down the path for good instead. Tokime’s resolve clearly overcomes her consternation over her past across this episode’s runtime, able to jump in and rescue Rentaro as she does. It’s also reflected in Shotaro’s faith in her that we see reinforced, as he stops beating himself up over not being able to go rescue her, and instead focuses on what he can do. His continuation of his investigation, effectively in tandem with Tokime’s efforts even as their communication is separated, speaks to the same sort of synched-up relationship we’ve seen him enjoy with Philip throughout. As far as Shotaro and the others are concerned, Tokime has proven that she absolutely belongs with them regardless of whatever her past with this Shadow Fuuto crew was.

Any payoff of that kind of revelation is left for next week’s presumptive finale for this story (though obviously I absolutely wouldn’t argue with a second season of this). Everything else here is filled out well with that big ol’ brawl in the first half. Though the bit with W taking that first major shot against Reactor is a bit stiff and overly-long, at least we got a brand-new weapon combo attack out of it. Gotta sell those toys somehow. Once our heroes really start hitting the Road(s) though, things pop off on the level they were last week. It really sells the absurd scale things are operating on at this point, in line with that aforementioned idea of how far things have come since FUUTO PI‘s more eased-in beginnings. And then as things wind down in the episode’s back half, it’s well in service of showing all the characters finding their resolve and using the power of that positivity to help the clients and push forward on solving the mystery. That’s the true measure of a detective that Shotaro has worked to impart to Tokime through this, so it perfectly fits to lead to her demonstrating that for the show’s last act. The Anime You Should Have Been Watching… in Fall 2012 Anime