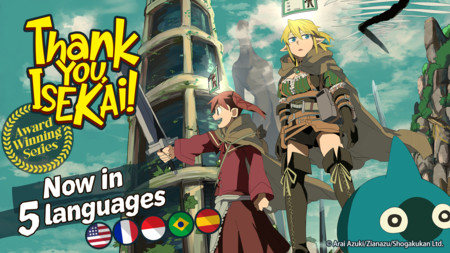 Digital manga publisher Comikey announced on Sunday that it will publish Arai Azuki and Zianazu’s Thank You, Isekai! (Isekai Arigatō) manga in four more languages in addition to English. The company will publish the manga in Spanish, French, Brazilian Portuguese, and Bahasa Indonesian as it releases in Japan.

Comikey will publish the first five chapters of the new translations and will then release one or two chapters per week until the manga catches up with the Japanese release.

The company began releasing the manga in English in February. Comikey describes the story:

The story itself—a comedy, fantasy, and yes, an isekai—revolves around Chiba and Sheina, a pair of single, otaku males in their 30s that met during a high school reunion. Shortly after hitting it off with each other, they’re thrown into one misfortune after another, and before they know it… They get reincarnated into an Isekai as pretty babes!

The release will be the first French release on the Comikey platform. Comikey began releasing manga outside of English in February with the launch of Yabako Sandrovich and Daromeon‘s Kengan Omega manga in Spanish, Portuguese, and Bahasa Indonesian.

Comikey said it “plans to further explore localization opportunities in other languages through its partnership with Shogakukan.”