Team Bigg Boss keeps coming up with inventive ways of keeping the audience hooked. And their hard work shows, either in the tasks that they make, or the creative ways they try at squeezing content out of the contestants. This time around in Bigg Boss 16, we can see the team has roped in a legendary comedian of the Indian television, Shekhar Suman. He comes in the house every week and does a segment or a chat show of sorts called, Bigg Bulletin with Shekhar Suman. In the segment he begins by making funny commentary on what all that has happened in the house the previous week and then calls into his studio, one or two contestants, he wishes to interact with. He asks them questions, obviously controversial and the ones which can evoke content, not just out of the invited housemates, but those sitting in the living room, watching them too.

In the Sunday telecast of Bigg Boss 16, along with other pandemonium that goes around in the house, Bigg Boss 16’s living room was seen echoing with a lot of laughter — courtesy Shekhar Suman. He was seen narrating a funny, poetic commentary on the happenings of the house. He commented on most of the contestants like he called Sumbul Touqeer Meena Kumar and said, “tumne apni jawani ke 18 saal bakhoobi ji liye hain.” He even teased Tina Datta by making her repeat his words like, “Main kisike pyar mein Shalin hu.”

Where all the housemates applauded for Shekhar, a lot of netizens do not seem to like the jokes that he cracked. Have a look, what they have to say: 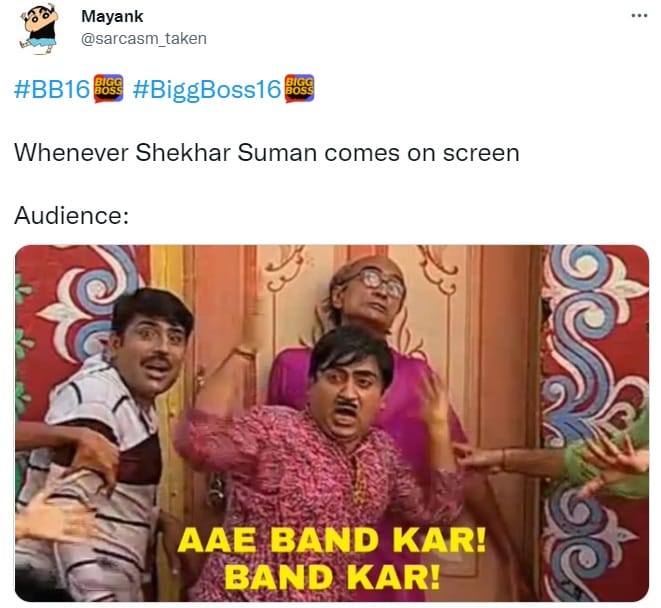 What do you think about the Bigg Bulletin Show with Shekhar Suman?