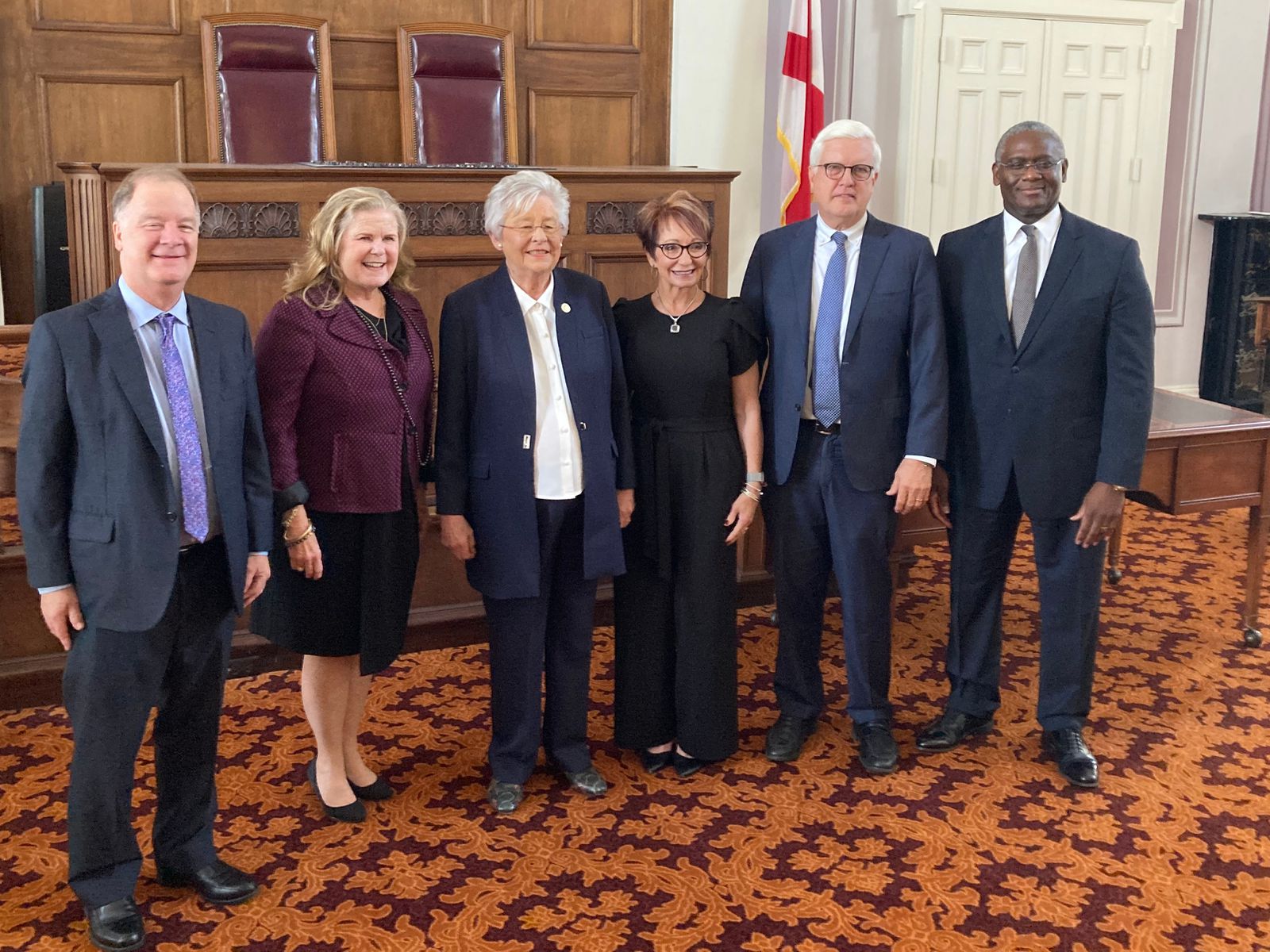 The Alabama Academy of Honor, created by the Legislature in the 1960s to recognize living Alabamians for accomplishments in business, civil rights, science, politics, education, literature, sports, and other fields, welcomed five new members today.

The academy maintains a membership of up to 100 living members, plus the governor and every living former governor. About 190 people elected to the academy have since died.

The members of the academy elect new members. It takes a vote by a majority of the members to elect a new member.

Cobb grew up in Evergreen and earned degrees in history and law from the University of Alabama. She was appointed district judge in Conecuh County at age 25 and went on to become the first woman elected to the Alabama Court of Criminal Appeals in 1994.

Cobb has championed improvements in the state’s juvenile justice system and programs to help children. She served as president of the Alabama Council of Juvenile and Family Court Judges and received the Juvenile Probation Officer Institute Outstanding Service Award, the Children’s Voice Award, and the Child Abuse Lifetime Achievement Award.

Cobb is a founding member of the Children First Foundation and helped establish the Alabama Children First Trust Fund, which has directed hundreds of millions of dollars to services for children and families.

Since 2010, Gorrie has been CEO of Brasfield & Gorrie, a general contracting firm founded by his father, Miller, that has grown to have more than 3,500 employees in 13 regional offices and revenues of $4.2 billion in 2021.

Gorrie began working for the company during summers in high school and college, learning the basics of the business in the equipment shop and the field. He went to work full-time after receiving a degree in building science from Auburn University in 1984.

Brasfield & Gorrie has built hundreds of projects across the state. The company was the Official Construction Partner of the World Games 2022 in Birmingham, where its projects include the BJCC Legacy Arena, City Walk BHAM, and the BJCC Protective Stadium.

Associated Builders and Contractors presented Gorrie a Cornerstone Award for lifetime achievement in 2014. He has promoted business growth in the state as director of the Economic Development Partnership of Alabama and the Birmingham Business Alliance.

Gorrie serves on the local and national boards of the Salvation Army and on the board of the Alys Stephens Center for the Performing Arts. He is chairman of the board of the Monday Morning Quarterback Club’s Quarterbacking Children’s Health Foundation.

In 1993, Myers became a professor and chair of the Department of Genetics at the Stanford University School of Medicine. At the Stanford Humane Genome Center, Myers led a team that contributed more than 10 percent of the data to the effort by the Human Genome Project to sequence the first human genome. Myers’ laboratory identified the genetic causes of several inherited diseases, including a form of childhood epilepsy and the most common cause of skin cancer.

Myers returned to Alabama in 2008 to become president and science director of the HudsonAlpha Institute for Biotechnology, a non-profit research and teaching institute in Huntsville. Myers was named chief scientific officer and president emeritus of HudsonAlpha in July.

HudsonAlpha’s research includes a focus on neurodegenerative conditions including Alzheimer’s disease, Huntington’s disease, and Amyotrophic Lateral Sclerosis, as well as neuropsychiatric disorders such as bipolar disorder, schizophrenia, and major depression. The goals are to understand the causes, develop therapies, and develop blood-based biomarker tests for early detection and monitoring.

Myers has been an avid teacher and mentor during his career. He was named a Fellow of the American Association for the Advancement of Science in 2011. The Alabama Academy of Science awarded him the Wright A. Gardner Award in 2020. Myers is senior editor of the journal “Genome Research” published by Cold Spring Harbor Laboratory Press.

Sarah Patterson and her husband David in 1978 took over an Alabama gymnastics program that had gone through four years and four coaches without a winning season. They built the Crimson Tide into a national powerhouse in the sport.

Patterson capitalized on her coaching success to spearhead the establishment of the Power of Pink initiative, created in 2004 to raise awareness in the fight against breast cancer. The Power of Pink campaign has contributed $2.1 million to the DCH Breast Cancer Fund to help prevent, detect, and treat breast cancer in uninsured women.

Patterson retired from coaching in 2014. She served as fundraising chair for the United Way of West Alabama in 2017 and serves on the boards of Elevate Tuscaloosa and Tuscaloosa Tourism and Sports.

Vines, a native of LaFayette in east Alabama, has served as president and CEO of Blue Cross and Blue Shield of Alabama, the largest health insurance provider in the state, since 2018.

Vines is a strong supporter of the work of his wife of 31 years, Antoinette (Toni), who is the founder of Mercy Deliverance Ministries, which provides access to affordable housing, health care, and fresh food in underserved areas.

Read more about the Alabama Academy of Honor.