We are back with another anime related to hairstyle. As we all know how much we like the hairstyle of anime characters, and we try to impersonate their hairstyle in the best possible way. There are different types of hairstyles we generally see in animes. Today in this article, we are going to discuss “Best 15+ Anime characters with Brown Curly Hair (2022)”.

Curly hair means having grains made up of fibers that wave without intersecting each other, and it often forms light and dark hair of curly maple. Generally, Curly hair people are often associated with a joyful, warm, and extroverted personality. The people with curly hair are brave, candid, and spontaneous, which is also reflected in our list. Just like the previous one, this list is also not rank-based; it’s just a normal one. So, let’s discuss.

Note: Here, we have mentioned the names of curly hair as well as wavy-hair anime characters, brown in color. 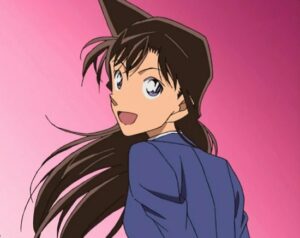 Ran is the female lead of the Detective Conan series and is the love interest of protagonist Shinichi Kudo. She is the daughter of detective Kogoro Mouri who is also known as sleeping Kogoro.

Ran is one of the most beautiful, kind-hearted, caring & brave girls in the series. She has beautiful purple eyes and dark brown curly hair. 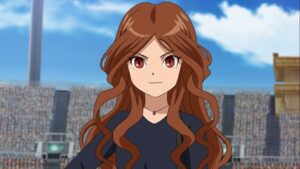 Natsumi Raimon is the wife of protagonist Endou Mamoru from the Inazuma eleven series. She was the third manager of a soccer club who joined after seeing Endou’s passion for soccer.

Natsumi has long, curly brown hair with long bangs that are parted in the middle. Of all the female characters in the series, she has much fairer skin. Also, Natsumi sucks at cooking which can be seen from Endou’s expressions which are hilarious to watch. 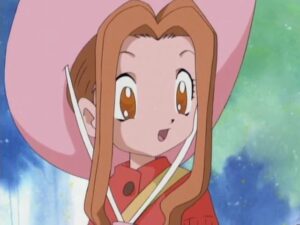 Mimi is one of the eight protagonists of the Digimon and Digimon Tri-series. She had a minor role in Digimon Adventure 02 and Digimon’s Last evolution movie.

Mimi is the partner of Palmon, and she has the trait of purity which is seen judging by her actions throughout the course of the series. She has long, curly brown hair and eyes. 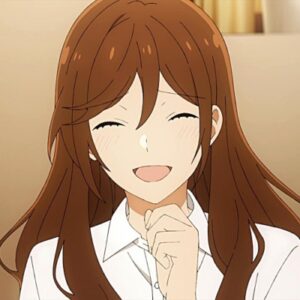 Hori is the female protagonist of the series and is the girlfriend of Izumi Miyamura. She is the brightest in her class and looks tall and skinny.

Hori has beautiful curly long hair with bangs swept which are chestnut brown in color, and has golden brown eyes.

She is often seen as jealous whenever other girls try to have a conservation with Miyamura, which makes her friend give her the nickname Ice Queen. 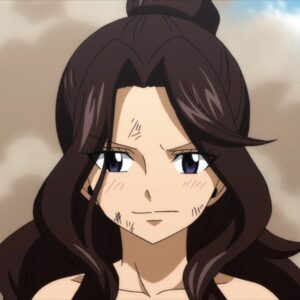 Cana Alberona is one of the strongest mages in the Fairy Tail guild. She is the daughter of Gildarts and is a heavy drinker. She has long brown hair, which is curlier and has a stunning appearance.

Her nature is very easygoing, but when it times to get serious, she becomes one of the frightening characters of the series. 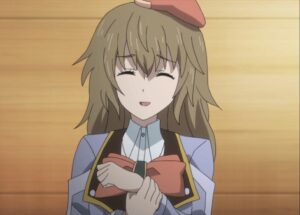 Yuki Amane is a minor character in Steins;Gate series. She is the wife of Itaru Hashida and is a lab member of Rintaro Okabe.

Yuki generally loves to cosplay, and it is one of the occasions when she meets Itaru. She has long brown curly hair with beautiful blue eyes and facial features. 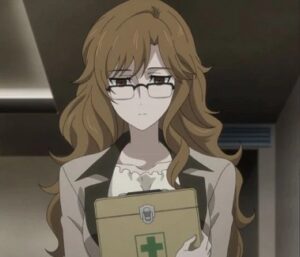 Moeka Kiriyu is a supporting character from the Steins;Gate series. She is a very attractive, stylish, and beautiful woman with pale skin, light walnut-brown hair which is curly with pink eyes and is very tall & skinny.

In the gamma timeline, Moeka is very ruthless, as she destroys Okabe and Mayuri without any remorse. But in the delta timeline, she is very friendly, and at the end of the series, Rintaro makes her lab member 005. 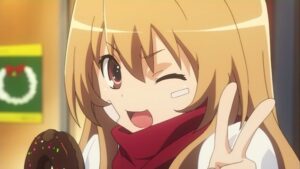 Taiga is the heroine of the Toradora series. For her short stature, she is way brutal, thus earning the nickname “Palmtop Tiger.”

She has beautiful long curly brown hair that goes through her height in waves and big dark eyes that are golden in color.

At the start, she has a crush on Yusaku Kitamura, but gradually she falls for Ryuuji Takasu over the course of the series. 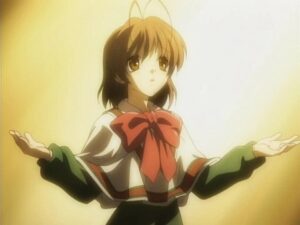 Nagisa is the female protoganist of Clannad. She was born to Akio Furukawa and Sanae Furukawa. Nagisa is a pretty girl with olive skin, short curly brown hair that reaches slightly under her shoulders, and large amber eyes tilted downward.

She has a fragile physique, as indicated by Tomoya Okazaki, so she is small for her age because of her ill health and weak immune system.

Nagisa becomes an even bigger force throughout the series and ends up getting married to Tomoyo Okazaki, with whom she has a daughter named Ushio Okazaki. 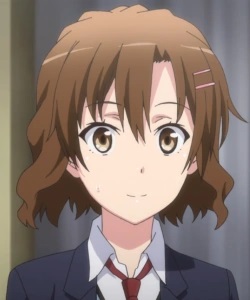 Kaori is the supporting character from the Oregairu series who was the former classmate of Hachiman Hikigaya during his middle school days.

After she rejects Hachiman, he leaves in a deep shock, changing his outlook on the world from his point of view. Kaori’s got a perm with a short curly hairdo. 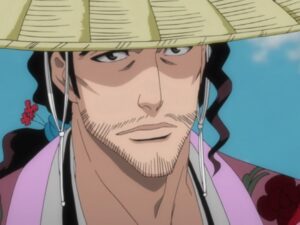 Shunsui Kyoraku is the former captain of the 8th division. Later after the death of Genryusai Yamamoto, he became 1st division captain and captain commander of Gotei 13.

Unlike other captains, he has two lieutenants, which makes him the first to have one in the history of soul society.

Nanao Ise and Genshiro Okikiba are the lieutuenats of his squad. Shunsui Kyōraku is a powerful Shinigami with light skin, high cheekbones, grey eyes, and long curly brown hair. 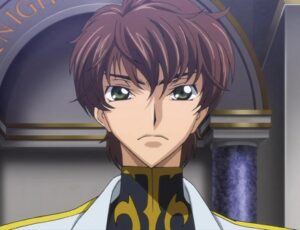 Suzaku is the second hero of the Code Geass series and is the best friend of Lelouch Vi Britannia. He has curly brown hair and green color eyes, which can give a fierce expression when he is in a great temper.

Suzaku is a young man who is a bit taller than Lelouch and has a muscle build despite looking relatively thin. He has been given the nickname White Knight.

At the end of the series, to make the world a better place, he joins Lelouch in his quest for peace. He kills Lelouch in front of the public while masquerading as Zero so that the world would be free of hatred.

It was painful for him when he had to stab his friend to death. Later on, he becomes the guardian of Nunnally, Lelouch’s sister. 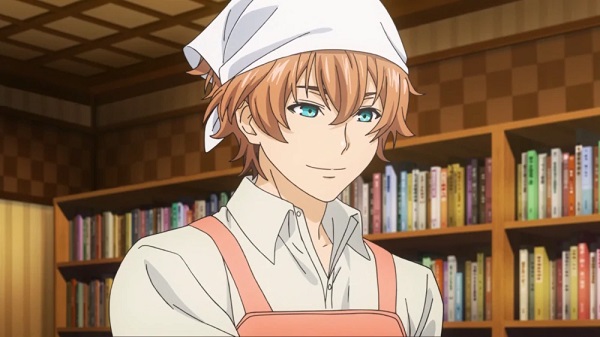 Isshiki is one of the supporting characters of the Food Wars series. He is from the 91st generation of Totsuki Alumni and was a hostelite of the Polar Star Dormitory.

At the beginning of the series, he held the 7th seat. After the promotion exams arc, he became the 2nd seat of the elite 10 councils.

Satoshi is a beautiful young man with dark curly hair of average length. His blue, cyan eyes are sometimes closed or ajar, displaying his carefree and gracious attitude.

Miyagi Ryota is a student at Shohaku High school, where he represents the basketball team. He has short hair, curly pompadour dark brown with brown reflections, which look like a bowl cut, and black eyes.

Miyagi is the point guard of the team. He is a very talented player. Despite his short height, Miyagi manages to surprise his opponents from time to time. He is the best friend of Sakuragi Hanamichi and has a crush on his team manager Ayako. 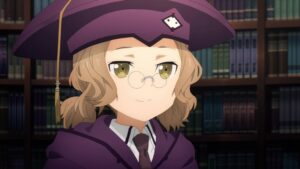 Cardinal is one the essential supporting character who played a significant role in the first half of the Alicization arc. She appeared as a skinny little girl with milky white skin, brown eyes, and short curly brown hair.

Cardinal was the incarnation of the error-checking sub-process of the Cardinal System in the Underworld, manifesting as an alternative and opposite personality to Quinella when she merged the system with her Fluctlight.

She finally became a separate person when Quinella transferred a copy of her memories to a little girl. She worked behind the scenes for the downfall of Quinella.

Her wish finally came true when Eugeo and Kirito showed up and fought against her and defeated Quinella once and for all. But sadly, she passed away during the final battle. 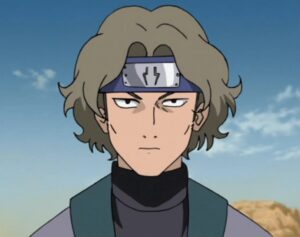 Kegon is a minor character from the Naruto Shippuden series who appeared in the filler arc. He has short, dark curly brown hair with little black eyes.

Kegon’s outfit consists of a purple jacket, the interior being green, a black top, her midriff on display, and dark trousers. He is a jonin from Takigakure Village who appeared during the Chunin Exams, where he was the protector of Fuu. Fuu was the host of Chomei, the seven tails Jiinchuriki.

After exams ended, Kegon returned to his village with his team but was ambushed by Akatsuki members Hidan and Kakazu. It was exactly not shown what happened to him in the anime but Akatsuki and Fuu defeated him got captured

So, this is it for today, folks! Here, we have concluded our article on “15+ Anime characters with Brown Curly Hair (2022).” We will be back with another fantastic article very soon. So, stay tuned.