Bang Hair is the front part of a person’s hair when cut short and is carried on the forehead. In animes, we have noticed that this type of hairstyle is mostly associated with women as they look very beautiful and amazing in this form of hairstyle. Today in this article, we are going to discuss “Best 15+ Anime characters with Black Hair and Bangs”.

Bang Hair people are funny, hot, and elegant but can also be cheerful, impertinent, or imbued with style and glamour. This list is not rank-based; it’s just a normal one. So, let’s discuss. 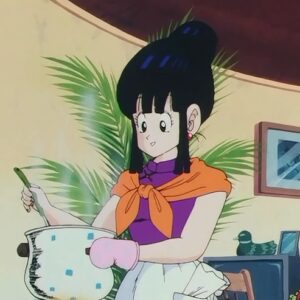 Chi-Chi is a pretty woman with fair skin, a thin but curvy frame, and normal height. She has long, dark hair reaching the middle of the back with short, square bangs and big black eyes.

Chi-Chi is the princess of fire mountain and the daughter of Ox King. She is the wife of Goku, the protagonist of the Dragon Ball series and the mother of Gohan and Goten.

She was initially presented as a shy and apprehensive girl. Throughout the series, she develops a very deadly, hard and ferocious personality. 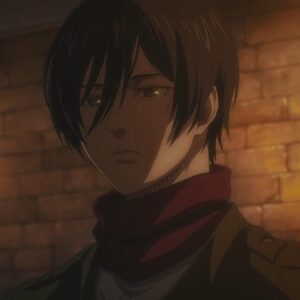 Mikasa is a fairly tall woman, in good physical condition, and well-toned with muscles lined up in all her arms, legs, and abdomen. After a time skip, her hair was shorter and cut to the back of her neck, although she also had significantly longer bangs.

Mikasa lost her parents at the age of nine and was taken in by Yeager’s household. She holds a lot of care and love for Eren. Mikasa loved Eren to the extent that she was ready to go through the same hell as him. 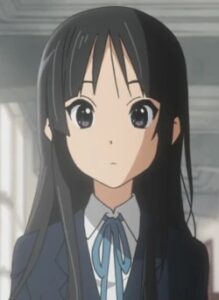 Mio is a very sweet and gentle girl who got long straight black hair with front bangs and greyish-blue eyes. She is a timid girl who is unsure of herself regarding her career as a bass guitarist and is afraid rather easily. She looks very appealing in a traditional school uniform. 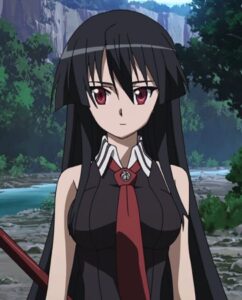 Akame is a beautiful young girl with long dark hair, front bangs descending to her knees, and red eyes. She is the female lead of the series alongside the male lead Tatsumi. She was trained as an assassin Empire alongside her sister Kurome.

Akame has demonstrated many physical attributes on a superhuman level. 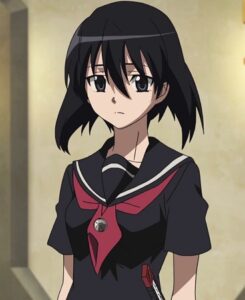 Kurome is the supporting antagonist of the series, who happens to be the younger sister of Akame. She was trained by the empire to be a deadly assassin during her childhood alongside her sister. She’s got short black hair with bangs and dark eyes. Just like her sister, she looks after her comrades.

6) Suzune Horikita (Classroom of the Elite) 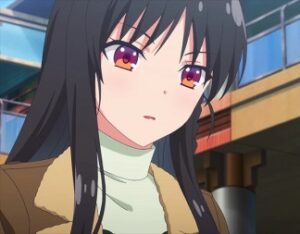 Horikita is one of the main characters in Classroom of the Elite series. She is a beautiful girl in her class, but due to her cold behavior, she has fewer friends. Horikita is usually seen alongside Ayankoji throughout the series, and she has long black hair with a bang that goes down through her waist. 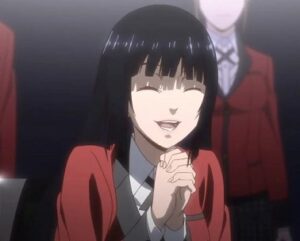 Yumeko, the main protagonist of the series, is a lovely girl with black hair and bangs. She is a transferred student who happens to be a classmate of Ryota. Yumeko is shown to be a very optimistic and charismatic person who happens to draw affection or interest from the people around her while making a scene. 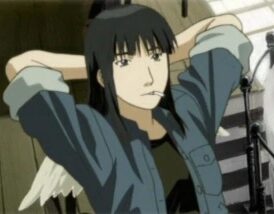 Reki is a mother figure in the Haibane household. She has dark-long hair with braided bangs and is very tomboyish. Reki is nice, considerate, gentle, and has a helping nature. She is the caretaker who is troubled by her dark past. 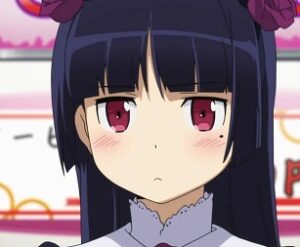 Ruri Gokuo, also known as Kurkoneko, is a supporting character from the series. She has long straight black hair well cut with bangs on her forehead in a hime style, has fair skin with drowsy eyes. Ruri is a big fan of Maschera and has immense dislike, particularly towards anime that focuses on Moe.

She is a part of the Otaku Group, which goes by the name Otaku Girls Unite. Ruri is socially insecure and feels shy & embarrassed when having a conversation with strangers. Despite this, she is a reliable older sister who does all household tasks and is a very good cook. 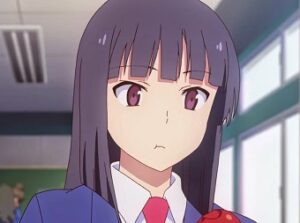 Ryuunosuke Akasaka has long, straight black hair, front bangs, and dark red eyes. Despite his appearance, he is a guy, but due to his feminine features, he often passes as a girl. Ryuunosuke is a second-year student who is studying at Suiko Academy.

He is an introvert who hates leaving his room and communicates only through emails or messages. He even programmed an Artificial Intelligence program called Maid to minimize the need for communication with others.

To make it worse, Ryuunosuke has a condition called gynophobia which is having a fear of women. Generally, he faints whenever women he touches. It becomes even more hilarious when Rita falls for him. Ryuunosuke is the only male character on the list. 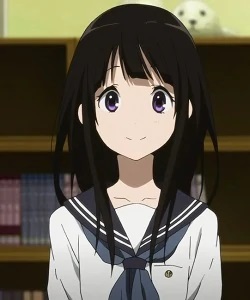 Eru is a deuteragonist of the Hyouka series as well as the president of the Classical Literature club. It is often noted that her curiosity about a few things leads the club to solve the mysteries.

She is one of the sweetest and most cheerful girls and is the exact opposite of the main character Oreki Hotaro in terms of personality.

Eru has an average height with straight black hair in the middle of her back that she sometimes wears in a long ponytail and bangs that are cut directly on her forehead that covers her eyebrows. She has beautiful big purple eyes, and throughout the series, she is mostly seen in her school uniform. 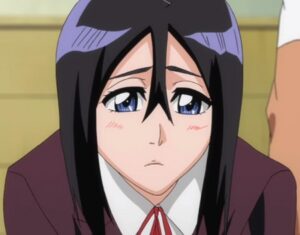 Ururu is a minor supporting character from the Bleach series who works at Kisuke Urahara’s shop. She has rounded eyes which are purple in color. Her long black hair, which has violet shades, has two bangs in the middle on each side.

She is the kindest and sweetest person and is not a loudmouth like Jinta, who works in the same shop. Despite her appearance, she is very powerful as she manages to fight an Arrancar Yylfordt Granz.

Also, during their training of Ichigo after his defeat at the hands of Byakuya, she ruthlessly attacks him. Her kick was way powerful, which forced Ichigo to wear protective gear. 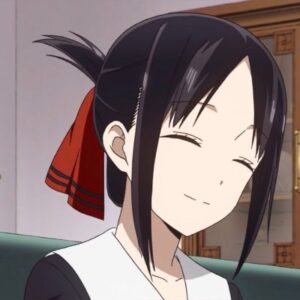 Kaguya Shinomiya is the female lead of the Kaguya Sama: Love is War series. She is a final year student at Shuchin Academy and Vice president of the student council, which she has become consequently two times.

She is the most beautiful girl with light skin and has long dark hair that is usually tied by her red color ribbon with bangs on both sides and big red eyes. Kaguya is an excellent archer and is a very rich person in the series.

She is very calculative and has a sharp mindset. Kaguya appears to be cold, but she deeply cares for her close friends, especially Miyuki Shirogane, whom she is in love with. 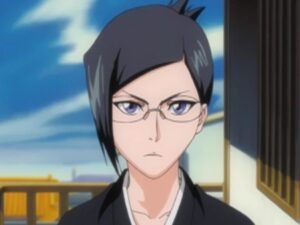 Nanao is the supporting character of the series, where she is a co-Lieutenant of the first division under Commander-Captain Shunsui Kyoraku. She shares her position with Genshiro Okikiba.

Nanao is a thin young girl with long black hair normally kept pinned back, with flat bangs dangling to the right of her face. She generally wears Shinigami Outfit and always gets mad at Kyorakau due to his easy-going nature.

Despite this, she cares about him a lot and is ready to take action whenever necessary. Nanao is also the president of the Female Shinigami Association. 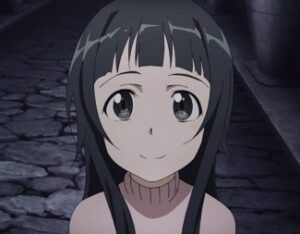 Yui is one of the supporting characters from the Sword Art Online series, who is the adopted daughter of Kirito and Asuna. She has straight, long black hair with bangs and eyes of the same color.

At the start of the series, she is a very depressed character, but after meeting Kirito and Asuna, she becomes more cheerful and happy.

Yui is also in a position to access search engines and computer networks. Her thought processes are extremely efficient, as she can extract almost 100% of useful data. 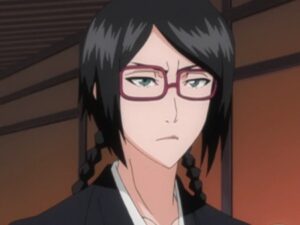 After the defeat of Yhwach, Lisa returned to soul society and became the new captain. Just like Nanao, she has a very serious personality.

Lisa has turquoise eyes, red oval sunglasses, and long dark hair. Her hair has bangs in front, and she keeps her back in a braided ponytail.

So, this is it, folks!! We will soon be back with another article on anime. Till then, stay tuned and stay updated. See you again.