Manga has 2 million copies in circulation 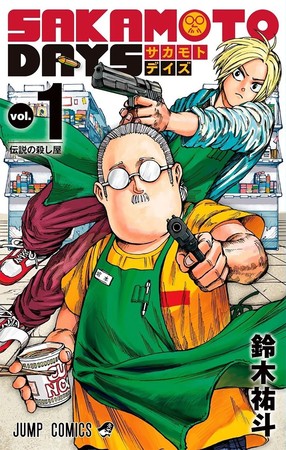 This year’s 46th issue of Shueisha‘s Weekly Shonen Jump magazine revealed on Monday that Yūto Suzuki‘s Sakamoto Days manga is getting a novel adaptation around spring 2023. The novel will feature an exclusive story.

Suzuki launched the manga in Weekly Shonen Jump in November 2020. Suzuki published a one-shot titled “Sakamoto” in Jump Giga in December 2019. Shueisha will publish the ninth volume on November 4.

The manga has 2 million copies in circulation. The manga will also have a character popularity poll with a deadline of November 30 to commemorate the manga’s second anniversary. Other second anniversary projects include a special poster in the autumn issue of Jump Giga on October 27 and LINE stamps.

Viz Media and MANGA Plus are publishing the manga in English digitally. MANGA Plus describes the manga:

Taro Sakamoto was the ultimate assassin, feared by villains and admired by hitmen. But one day…he fell in love! Retirement, marriage, fatherhood and then… Sakamoto gained weight! The chubby guy who runs the neighborhood store is actually a former legendary hitman! Can he protect his family from danger? Get ready to experience a new kind of action comedy series!

Viz Media is also publishing the manga in print and will release the fifth volume on December 13.