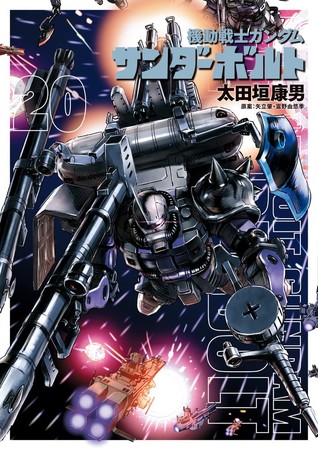 Yasuo Ohtagaki revealed at an opening event for the 10th anniversary exhibition for his Mobile Suit Gundam Thunderbolt manga that he plans to continue the manga for another five to six years.

Ohtagaki said, “it seems like I can do it for five, six more years.” He added, “The manga is not over yet (laugh). The climax has started. Because of the things that have built up over the past 10 years, the climax is becoming enjoyable, and I am resolving the foreshadowing I have done until now. It seems like it will take another five years.”

Ohtagaki had revealed in manga’s 19th volume in February that the manga had entered its “final stage.”

Ohtagaki had put the manga on hiatus in September 2018 due to tenosynovitis (inflammation surrounding the tendons), and resumed the manga in December 2018. In a message accompanying the manga’s resumption, Ohtagaki noted due to the worsening symptoms, he has been unable to draw small details using his dominant left hand, and it may be difficult to maintain the quality level of the manga. He added he would change his drawing style so as not to worsen the condition of his left hand.

The manga’s story is set in the same One Year War in UC 0079 as the first Mobile Suit Gundam anime series. It begins with the battles between two ace pilots of the Principality of Zeon and the Earth Federation at the “Thunderbolt Sector,” a shoal zone with numerous wrecks of space colonies and warships.