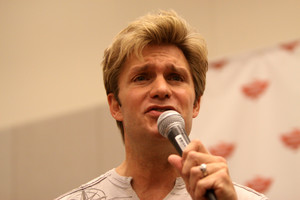 On September 29, the Texas Second Court of Appeals denied voice actor Vic Mignogna‘s request for a court rehearing and En Banc Reconsideration (in which all of the judges of an appellate court participate in the rehearing) in his defamation lawsuit against Funimation, voice actresses Jamie Marchi and Monica Rial, and Rial’s fiance Ron Toye. The court maintained its judgment made on August 18 against Mignogna.

Mignogna made the requests for a court rehearing and En Banc Reconsideration on September 20. He had first asked for an extension for the deadline for post-appeal motions, which is typically 15 days after a court of appeals judgment is ordered. The court issued its judgment against Mignogna on August 18, but he requested an extension to file rehearing motions to October 17, stating that his counsel did not have enough time to analyze the results. The court granted an extension to September 20.

In August, the Texas Second Court of Appeals upheld the Tarrant County District Court’s November 2019 judgment against voice actor Mignogna, in his defamation lawsuit against Funimation, voice actresses Marchi and Rial, and Rial’s fiance Toye. The court however also determined the attorney’s fee amount initially awarded to Rial and Toye was less than what was “supported by factually sufficient evidence.”

Therefore, the appeals court ordered the Tarrant County District Court to redetermine the awards that Mignogna must pay Rial and Toye for their attorney’s fees. Otherwise, the appeals court rejected all points of Mignogna’s appeal and affirmed the original ruling of the trial court. The appeals court also ordered Mignogna to “pay all costs of this appeal.”

The Tarrant County District Court originally awarded Rial and Toye with US$100,000 in attorney’s fees. Rial and Toye contended the amount is less than the amount of US$282,953.80 in attorney’s fees they requested and provided evidence for. In examining the evidence, the Texas Second Court of Appeals’ majority opinion stated the trial court “failed to factor in all of the testimony addressing expertise and experience, as well as the distinction between a large firm’s billing rate and a small firm’s billing rate,” the latter referring to the attorney’s fees awarded by the trial court to Jamie Marchi, who had the lowest attorney’s fees among the defendants.

Over the course of his career, controversial voice actor Mignogna has received multiple allegations of sexual harassment from both colleagues and fans/convention attendees, which came to a head in 2019 when Funimation ceased its working relationship with him. Mignogna then sued both Funimation and voice actor colleagues Marchi and Rial, as well as Rial’s fiance Toye, for defamation. The court later dismissed these lawsuits. The judge ruled that Mignogna must pay US$223,042.42 in attorneys’ fees to the defendants. The judgment also ordered him to pay US$15,000 in sanctions, for a total of US$238,042.42. Additionally, the judgment listed US$287,500 in contingent fees that Mignogna may have to pay if he chose to appeal.

The trial court based its decision on the Texas Citizens Participation Act. Like several other states, Texas passed this statute to prevent SLAPP (Strategic Lawsuits Against Public Participation), or lawsuits filed to stifle other people’s freedoms of speech, association, and petition.

Mignogna has maintained that he is innocent of the allegations against him.