The staff for the television anime of Makoto Hoshino‘s The Tale of the Outcasts (Nokemono-tachi no Yoru) manga revealed the anime’s additional cast members and key visual on Monday: 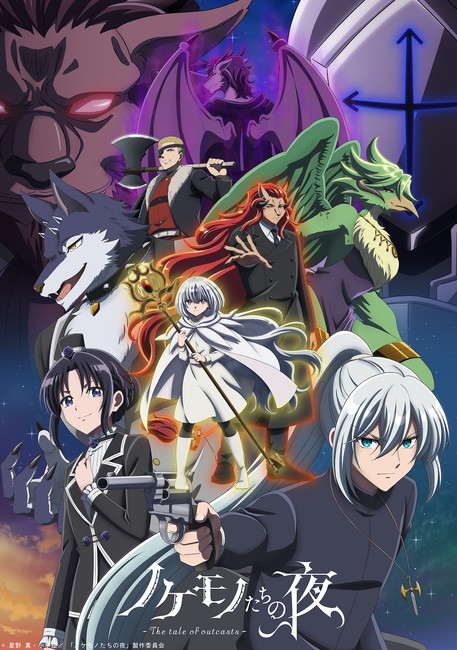 The newly announced cast members include:

Seven Seas Entertainment has licensed the manga, and it describes the story:

Wisteria is an orphan girl living in a corner of the British Empire at the end of the 19th century. Her life is desolate and bleak–until she encounters Malbus, a powerful but equally lonely immortal being with a furry appearance, hounded by hunters. Together, Wisteria and Malbus roam the Empire–populated by humans and human-like beasts–in search of a place where they can live together in peace.

The anime’s staff previously announced that Ayana Taketatsu and Katsuyuki Konishi will play the main characters Wisteria and Marbas respectively, and Ryōta Ōsaka will play as Wisteria’s older brother Snow.

The staff for the anime include:

The staff also previously announced that the anime will premiere in January 2023.

Hoshino debuted the manga in Shogakukan‘s Weekly Shonen Sunday in August 2019. The manga ended in April 2021. The eighth and final compiled book volume shipped alongside the seventh volume in May 2021.

Sources: The Tale of the Outcasts anime’s website, Comic Natalie Episode 6 – The Eminence in Shadow Anime