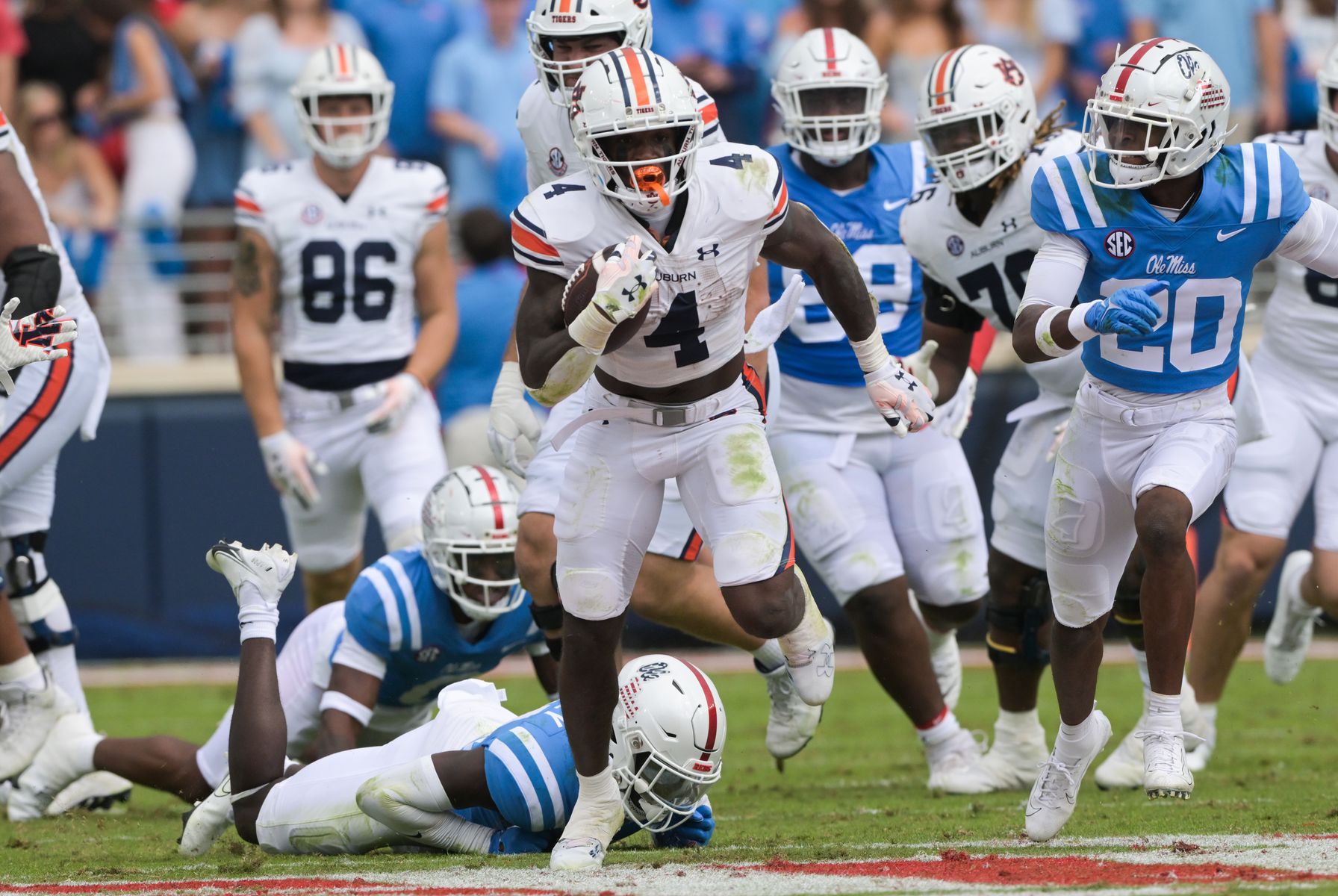 There’s something about playing Ole Miss that brings out the best in Tank Bigsby.

Three of the running back’s best career games have come against the Rebels, with the latest installment registering as arguably the best rushing performance of his career. Bigsby ran for 179 yards and a pair of touchdowns during Auburn’s 48-34 loss to Ole Miss, helping keep the Tigers in the game after falling behind by 21 points early in the second quarter.

It was Bigsby’s third career 100-yard effort in as many games against the Rebels.

“I don’t even think it’s Ole Miss, man,” linebacker Owen Pappoe said. “Tank’s a guy who just shows up every day and gives his all. He had a good game today, man. A good bit of electric runs.”

That was a modest assessment by Pappoe. Bigsby’s effort against Ole Miss was a virtuoso performance by a true NFL talent who has struggled to get things going behind a less-than-stellar offensive line this season.

Bigsby’s 179 rushing yards against the Rebels was the second-best single-game total of his career, surpassed only by the 192 yards he racked up against Mississippi State in the final game of his freshman season. Bigsby matched a career high with two rushing touchdowns Saturday, and his 9 yards per carry marked a career-high against Power 5 competition and the fourth-best average overall; he averaged 11.1 yards per carry against Alabama State last season and 9.2 yards per carry against both Mercer in this year’s opener and against Akron in last year’s opener.

It also moved him past Michael Dyer and Stacy Danley and into 12th on Auburn’s career rushing list (2,457 yards), just 37 yards behind Kerryon Johnson (2,494) in the program record book.

“I was really proud of Tank; he went hard,” Auburn coach Bryan Harsin said. “He got vertical, he stuck his foot in the ground and got vertical on quite a few runs, and it showed. He was able to create some explosive plays that way.”

In three career games against the Rebels, Bigsby has run for 448 yards and five touchdowns. He averages 149.3 rushing yards per game and 6.69 yards per carry against Ole Miss for his career. Those are easily his best career numbers against any team he has played more than once.

Of Bigsby’s 20 carries against Ole Miss on Saturday, six went for at least 10 yards, including a pair of 50-yard runs that were his two longest carries of the season. One of those 50-yarders was a touchdown on Auburn’s opening drive of the second half, which cut Ole Miss’ lead to four — the closest the Tigers got all game after falling behind 21-0 early.

While the explosive runs were plentiful at Vaught-Hemingway Stadium, for both teams, the more notable stat for Bigsby was that only two of his 20 touches went for no gain or a loss of yards; he had one run stopped at the line of scrimmage and one for a 1-yard loss. Other than that, the junior was largely able to avoid contact behind the line of scrimmage — something that has impacted his overall production this season behind a subpar offensive line.

Bigsby’s big game against Ole Miss ended a career-worst stretch for the talented running back. He’d been held to 51 yards or fewer in five straight games and entered Saturday’s game averaging just 2.94 yards per carry against Power 5 opponents this season, which was 36th among qualifying SEC rushers, ahead of only a trio of quarterbacks.

Against the Rebels, the Tigers’ offensive line had its best game of the season against quality competition. Not only did the group pave the way for Bigsby’s 179 yards, but its improved blocking up front allowed Auburn to run for 301 total yards and four touchdowns while averaging 7.3 sack-adjusted yards per carry. It was Auburn’s first 300-yard rushing game against a Power 5 opponent since 2017 against Arkansas.

“Those guys came out running the ball hard,” Bigsbys said of his offensive line. “Throughout the game today, the confidence got higher and higher, and we just stuck with it. We said we were going to run down their throat and that was the mentality of the game. That’s what we came in to do.”