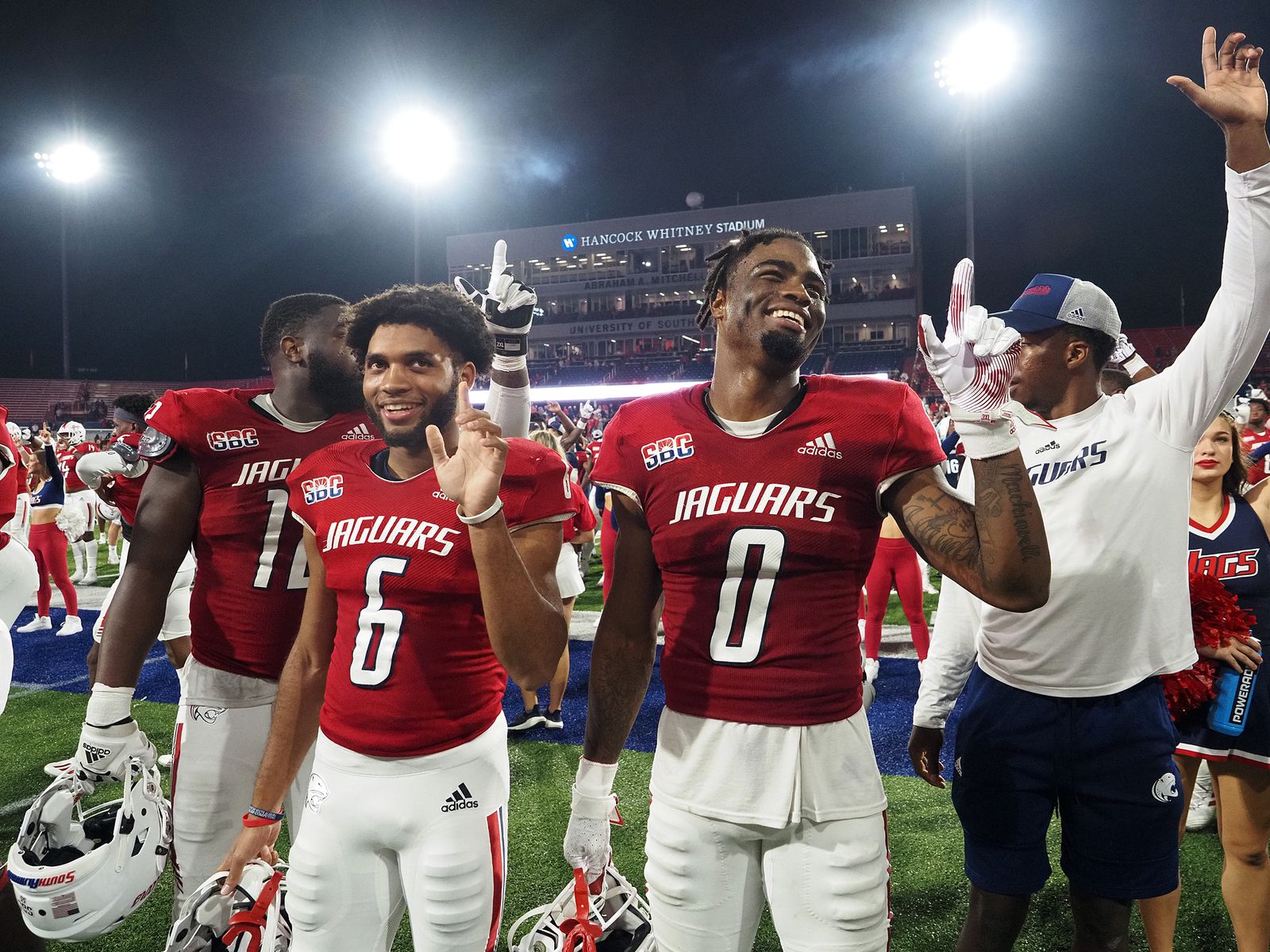 South Alabama took care of business well enough on Saturday vs. Louisiana-Monroe to set up a mammoth “Battle for the Belt” in five days.

The Jaguars held off the Warhawks 41-34 at Hancock Whitney Stadium, as Carter Bradley outdueled Chandler Rogers in a classic Sun Belt Conference shootout. South Alabama is now 5-1 overall and 2-0 in the Sun Belt and hosts arch-rival Troy (5-2, 3-1) for a nationally-televised showdown Thursday night.

“In that situation, it’s great to come out with a win,” South Alabama coach Kane Wommack said. “Those games are hard to come by, and I tell you what, I’ve seen Louisiana-Monroe for a long time and those guys just continue to fight. … A lot of things, good things, you can point to. But obviously the explosive plays on defense and then some execution errors on our part that are truly unacceptable. So those things will get corrected, but it’s nice to correct them at 5-1.”

Bradley completed 25 of 33 passes for three touchdowns and a school-record 420 yards, with three South Alabama receivers going over the 100-yard mark. Devin Voisin caught seven passes for 141 yards, Caullin Lacy collected a program-record 12 catches for 133 yards and a touchdown and Wayne hauled in five passes for 127 yards and two scores.

South Alabama’s 195 rushing yards added up to 615 yards of total offense, the second-most in Jaguars history behind 630 vs. Troy in 2013. Marco Lee and Omni Wells — subbing for La’Damian Webb, who left with a rib injury in the first quarter — combined for 178 yards on 32 carries and two touchdowns, both by Lee.

“You look at the opportunities that we created for ourselves, both in the run and pass game offensively, Carter Bradley throwing for a school record is phenomenal,” Wommack said. “We did some great things tonight in the run game. We ran the ball early, ran it often, ran it when we needed it in the third and fourth quarters.”

For ULM, Rogers completed 20 of 27 passes for 371 yards and four touchdowns, his second straight big game against South Alabama. He threw for 363 yards and four scores in a 41-31 win over the Jaguars last season in Monroe.

ULM’s Tyrone Howell caught nine passes for 244 yards and three touchdowns, with his yardage total the most ever allowed by South Alabama to an individual opponent. The Warhawks ran for just 67 yards on 31 carries, however, and went just 3-for-12 on third down.

“We knew coming in that (Rogers) was going to be able to run the ball, but we wanted to come in and just be able to keep him in a pocket and from going outside of pocket,” South Alabama defensive end Jamie Sheriff said. “We wanted to force him to beat us by throwing the ball inside the pocket.”

South Alabama trailed 20-17 at halftime, but took control with a 17-point third quarter. Bradley hit Wayne for a 20-yard touchdown on the opening series of the second half to put the Jaguars up 24-20, then USA converted the game’s lone turnover into another touchdown.

Jaguars cornerback Darrell Luter deflected a pass into the arms of safety Yam Banks, who returned the ball to the ULM 41. Bradley found Voisin for 17, then connected with Lacy on a 24-yard score to put the Jaguars up 31-20 at the 10:36 mark of the third.

“We were in our ‘cat’ package where we bring six DBs, so I had to go to the boundary and play free safety,” said Banks, who leads the Jaguars with three interceptions this season. “We were in man coverage, and I played my man, and the ball was in the air, and I just had the effort to make the play.”

South Alabama later added Diego Guajardo’s 29-yard field goal late in the third, and Lee’s 5-yard touchdown run on the first play of the fourth quarter. The Jaguars led 41-20 at that point, but Rogers and ULM had one final surge.

Rogers found Howell on an 83-yard score with 9:52 remaining to make it 41-27, then the Warhawks forced a South Alabama three-and-out. The Warhawks quickly drove for Rogers’ 7-yard pass to tight end Zach Rasmussen, and suddenly USA led by just seven with five minutes remaining.

The South Alabama running game took over at that point, running out the clock and keeping Rogers on the sideline. Lee had runs of 11 and 32 yards, then picked up seven on third-and-5 to end any hopes of the Warhawks getting the ball back.

“They were under 100 yards (rushing) most of the night, but when they had to win the game, we couldn’t stop them,” ULM coach Terry Bowden said. “We had four minutes left with three timeouts and they were on their 12-yard line, but we couldn’t get them off the field. That was with their running attack. They made us miss a lot of tackles, and they really caused some problems for us.”

ULM led 20-17 at halftime thanks to a pair of Rogers touchdown passes and two Calum Sutherland field goals. Rogers hit Powell on both of the scores, a 75-yarder in the first quarter and a 25-yarder in the second.

Sutherland connected from 24 and 40 yards, the latter putting the Warhawks up three with 1:50 left in the half. South Alabama drove to the ULM 11 in the final seconds, but could not stop the clock to set up a field goal.

South Alabama’s first-half points came on a 64-yard touchdown pass from Bradley to Wayne, a 4-yard Lee run and Guajardo’s 34-yard field goal. The Jaguars went just 1-for-5 on third down and got just one touchdown on three trips to the red zone in the first half.

Troy beat Texas State 17-14 at home on Saturday afternoon, the Trojans’ fourth straight victory after a 1-2 start. Troy, which moved to the Sun Belt West Division when the conference expanded this season, has beaten South Alabama four straight years and in five of the last six.

Kickoff Thursday is set for 6:30 p.m. at Hancock Whitney Stadium. The game will be televised live by ESPNU. Is The Show Coming? – Latest News