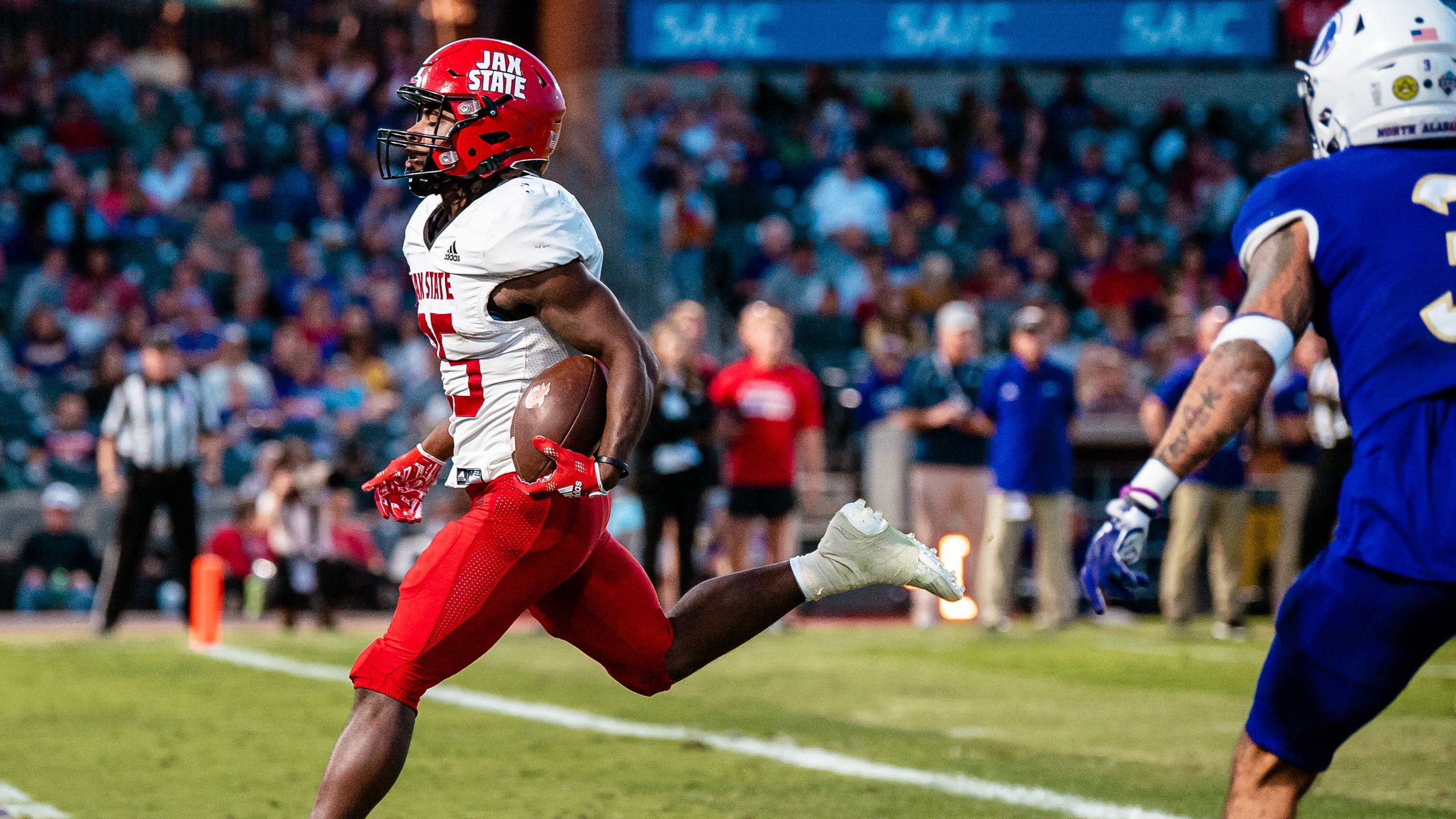 Not just a once-popular boy band, but the unique configuration at Toyota Field, home of the minor league Rocket City Trash Pandas, for the milestone 50th football meeting between Jacksonville State and the University of North Alabama.

Jax State (6-1) held off its longtime rival 47-31 before an announced crowd of 10,124 in the first football game played in the multi-use facility and home of the the Double-A affiliate of the Los Angeles Angels of Anaheim.

Due to safety protocols, all offensive plays were run toward the west end zone (first base dugout), which had the required 10 yards available beyond the back of the end zone.

The east end zone (leftfield wall) was regulation depth and defensive touchdowns, safeties and punt returns could occur in that direction. After every change of possession, the ball was repositioned.

It was, according to participants, organizers and fans, a truly unique experience.

“I really thought it was a neat environment,” said Jacksonville State head coach Rich Rodriguez. “I was a little leery going into it because I’ve never played on a baseball field, but it worked out fine.

“In some ways it made the game go faster. It was easier to watch. When you practice you always go in the same direction. If we had lost, I probably would have complained about it.”

The game took 3 hours and 13 minutes to play.

Joel Lamp with the Huntsville/Madison County Convention & Visitors Bureau said game organizers were pleased with how the matchup was received by fans from both programs.

“It’s a great opportunity for us to introduce Madison and the Trash Panda way to a lot of different people,” Lamp said. “Everybody was having a great time and that’s all that we could ask for.

“It’s different playing in one direction. We did a great job of preparing everybody for what was coming. I think everyone felt really confident with the plan and it’s paid off.”

This was the first NCAA Division I game to feature “one-directional” football since Northwestern and Illinois played at Wrigley Field in 2010 and game organizers believe it was the first in history involving two FCS programs.

There were a few missteps, likely due to lack of familiarity with NCAA in-game procedures. On more than one occasion, music played over the public address system as the offense attempted to run plays. But that issue was resolved quickly.

“We’ve been talking with the Trash Pandas this week about ‘hey, what’s next?’,” Lamp said. “We’ll get through this, take a look at what worked, what didn’t, take that and then figure out what we can do next.”

The fans were also felt the unique aspect of the matchup was positive.

“This has been a great venue for a football game, and I hope these are the types of matchups that we will see here for years to come,” said Fairhope resident and UNA supporter Jake O’Neil, who attended the game with several family members. “The atmosphere was outstanding, the fans were loud. The whole thing was great and I enjoyed it a lot.”

Both programs have previously played football in stadiums built for baseball.

Jax State and Kennesaw State played a memorable five-overtime affair at SunTrust (now Truist) Park, the home of the Atlanta Braves, in 2018.

UNA previously faced Alabama A&M in 1985 at Joe Davis Stadium, former home of the Double-A Huntsville Stars, and the Gamecocks also played AAMU there in the mid-’80s.

“The field was fantastic from a playing standpoint. Everyone’s had a great experience – fans, coaches and all involved. Overall, if I was on the other side, I would call it a success.”

Anwar Lewis rushed for 165 yards and two touchdowns and Zion Webb threw for one touchdown and ran for another as JSU defeated the Lions for the sixth consecutive time.

JSU finished with 511 total yards while the Lions recorded 448 yards.