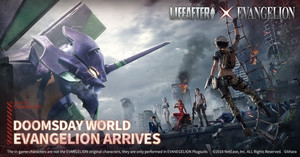 NetEase Games announced on Friday that the LifeAfter survival game will hold its first Evangelion crossover from October 13 to 27.

The crossover features a limited Stage, where Infected Angels appears in the Doomsday World. Survivors are tasked to go to a mysterious abandoned building in a four-man squad and find power source to recharge the underpowered Evangelion Test Type-01. After having successfully defeated the Infected Angels and started the two power devices, Survivors will meet up with the fully-charged Evangelion Test Type-01 and fight the final Boss, who has the abilities of several Angels and can generate an A.T. Field.

The event will feature over 60 crossover items such as character and pet outfits for Shinji, Rei, Asuka, Kaworu and Mari. You can also obtain Evangelion Test Type-01-themed furniture for the Manor, plus a weapon, drone, car paint, PenPen style backpack, and other miscellaneous gear.

NetEase Games launched its LifeAfter open-world zombie survival smartphone game in China in November 2018, and in English-speaking territories in February 2019. The game held an Attack on Titan crossover in September.