Toei began streaming two movie clip videos from the anime films of Yomiji Otono’s Boku ga Aishita Subete no Kimi e (To Every You I’ve Loved Before) and Kimi o Aishita Hitori no Boku e (To Me, The One Who Loved You) novels on Friday.

Actress Kimiko Yo plays the heroine Kazune Takigawa’s elderly self in Boku ga Aishita Subete no Kimi e, while actor Tokuma Nishioka plays the protagonist Koyomi Takasaki’s elderly self in the two films. The below clip shows Koyomi and Kazune together in their old age. 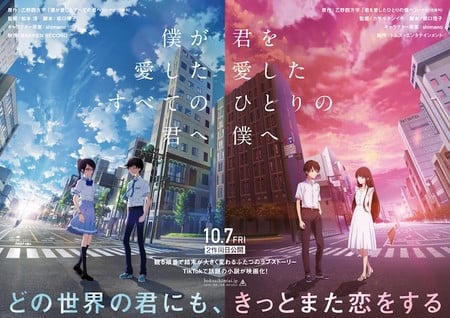 Both films premiered simultaneously on October 7. Kimi o Aishita Hitori no Boku e ranked at #9 in its opening weekend and Boku ga Aishita Subete no Kimi e ranked at #10.

Otono released the two science-fiction romance novels on the same day on June 23, 2016. Both complement each other, but can be read in either order. The books take place in a world where traveling to parallel worlds is a common, everyday occurrence.

Boku ga Aishita Subete no Kimi e centers on Koyomi Takasaki, a boy who lives with his mother after his parents divorce. He attempts to make friends in his new college prep school, but his social awkwardness combined with an atmosphere of focusing on studies means he is unsuccessful. One day, his classmate Kazune Takigawa approaches him, and tells him that she is actually from World Line 85, where she and Koyomi are lovers.

Kimi o Aishita Hitori no Boku e centers on Koyomi Hidaka, a boy who lives with his father after his parents divorce. He meets a girl named Shiori Satō at his father’s research lab, and they begin a relationship that is slowly blossoming into love. But everything changes when their parents decide to marry each other, and they decide to move to a parallel world where they are not stepsiblings.