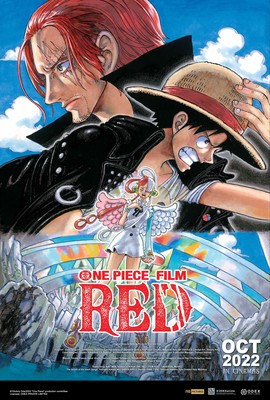 Toei announced on Saturday that it has recorded a box office revenue of 22,045,453,934 billion yen (about US$151 million) for the films it has distributed in the period from January 1 to September 30 this year, already making it the company’s highest-earning year in the box office.

Toei opened the One Piece Film Red anime in Japan on August 6. The film has sold a total of 11.69 million tickets, and has earned a cumulative total of 16,247,220,400 yen (about US$112.2 million) as of October 2. The movie has become the franchise‘s highest-selling and highest-earning film installment, in terms of both the number of tickets sold and yen earned at the box office. The anime is both the #6 all-time highest-earning anime film in Japan and the #11 all-time highest earning film in Japan.

As of September 30, the film had earned 15.7 billion yen, making up more than 70% of Toei‘s box office revenue for the first nine months of the year. Other films that have done well for Toei so far this year include Dragon Ball Super: Super Hero. Toei will open the The First Slam Dunk film on December 3 and the Kamen Rider Geats x Revice Winter Movie 2022 film on December 23.

2009 was previously Toei‘s highest-earning box office year, when it recorded 17,980,254,340 yen (about US$123 million). The company also distributed One Piece Film Strong World that year, along with films such as Tsurukidake: Ten no Ki and Kamen Rider Decade / Samurai Sentai Shinkenger.