Netflix began streaming a video titled “The Making of Drifting Home with Director Hiroyasu Ishida” on YouTube on Friday. The video features text commentary from Ishida about the making of Studio Colorido‘s new full-length anime film Drifting Home (Ame o Tsugeru Hyōryū Danchi). Ishida discussed how he came up with the story of the film, how he developed the characters, and the research he did to design the apartment complex. 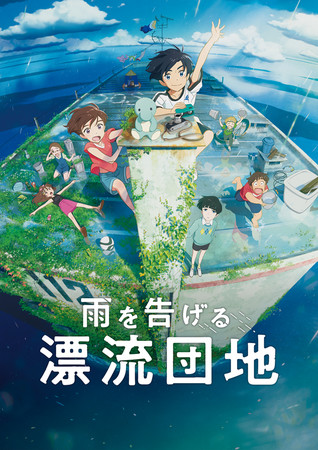 The film debuted on Netflix worldwide on September 16. The film also began screening in theaters in Japan on the same day. The movie is Studio Colorido‘s third full-length anime film.

The “adventure fantasy as summer ends” anime centers on Kōsuke and his childhood friend Natsume. The two recently entered sixth grade, and are entering an awkward phase in their friendship and have started avoiding one another. One day during summer vacation, they visit an apartment building with that is about to be demolished, where the two of them used to live. Suddenly, Kōsuke, Natsume, and their friends get wrapped up in a strange phenomenon, and the whole building is surrounded by an ocean. The group of friends must try to find their way home from the drifting building.