It’s a pretty complex question. Most of us can come up with a few answers off the top of our heads, though. Some might say a hero is a firefighter, someone who is willing to run into danger to help others. Others might say a doctor or a nurse, someone who dedicates their life to taking care of the sick and injured and keeping the public healthy. Still others might say a teacher, a person who gives up so much of their own time and resources to enrich the minds of the next generation, or even a sanitation worker, who keeps cities clean by removing trash and running sanitation facilities. You might notice a common theme between all of these people: They are seen as selfless, not expecting gratitude in return for all of the work they do to keep society up and running. They put others before themselves in their day-to-day life.

As said before, though, it is still a complex question, one that Tiger & Bunny spends a lot of time trying to answer. Throughout the series, we meet a number of heroes, each with their own motivations, insecurities, and issues. Just like the heroes we might think of in our day-to-day lives, though, the heroes of Tiger & Bunny also have something in common: they are performers.

Tiger & Bunny is a fascinating study of what a world with superheroes would be like. Instead of focusing strictly on the heroics of its cast, it focuses on the way heroes are entertainers. All of their exploits are captured by Hero TV. They earn points for being the first on the scene, capturing criminals, and saving civilians. Their suits are covered in brand logos. They aren’t asked to run into danger head-on; often, they’re told to wait for the most dramatic moment, or for the best angle. People watch with excitement as their favorite heroes work, as if they’re watching a regular television show instead of a real-time crisis. Heroes, in this world, are a product of capitalism, owned by media companies and used as walking billboards instead of defenders of justice and peace. In this sense, the series poses an interesting question about the idea of heroism. 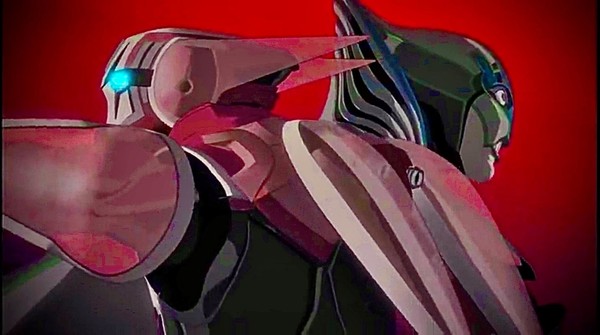 “Without the money and fame behind you, can you really save anybody?

It’s a cynical question, sure. Throughout the first season, it is a source of major conflict between Kotetsu and Barnaby. Barnaby understands the need to keep sponsors happy. He knows that without their funding and influence, he’s no hero at all. The attention they receive and sponsors they acquire keep them in business as heroes, and if that means they have to play things up for the cameras, so be it. But Kotetsu is an idealist. He believes a hero’s job isn’t to receive praise, or to put on a good show, but to save the people crying out for help. But we see that even for Kotetsu, fame isn’t necessarily unwanted. We see him beg for kids to take his trading cards, and we know he was once the King of Heroes. Unlike Barnaby, though, Kotetsu doesn’t see fame as a way to increase sponsorships or further his own goals. He doesn’t see points as a way to make it to the top of the rankings. For him, these things are meant to spread his ideal of altruistic heroism. If he is someone’s favorite hero, then it means that his beliefs aren’t ending with him. 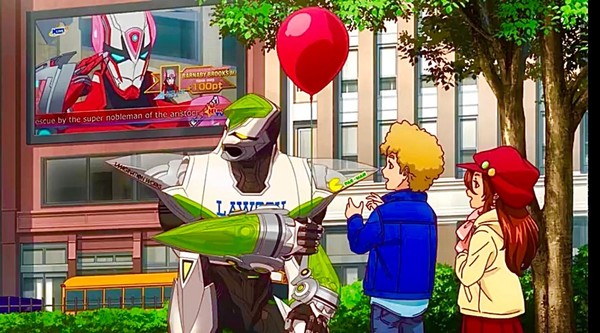 “So, is the motivation behind heroism really important? Or is the important thing that the heroes are there?”

This is another question Tiger & Bunny asks. We are introduced to eight heroes in the first season, each with their own reasons for being heroes. Some of these reasons, such as Blue Rose’s, might seem incredibly selfish. She only wants to be a singer, and as long as she does hero work, she can pursue that. Of course, we do see her ideals change as she grows closer to Kotetsu, but her initial goals aren’t what people usually think of when they think of a hero. We’re introduced to four more heroes in season two, and we meet characters with personalities that most would find unbecoming of heroes, such as Ryan with his pompous arrogance and Thomas with his incredibly cold and solitary demeanor. They all still do a hero’s job, though.

To answer this question, the series uses the perfect leading man: Kotetsu. While Kotetsu is constantly framed as the charming and lovable idiot with a heart of gold trying to do what’s right, it also presents him as a direct protest of the capitalistic entertainment heroism the world of Tiger & Bunny sets up. He refuses to stand aside just because it would make for a better show. He shows little interest in brand deals and photo shoots. Kotetsu is a man that values others and strives to be a hero for the people around him, both in and out of costume. He’s not doing it for money or fame; he is doing it because it’s the right thing to do, and isn’t that reason enough to do it? In doing this, he starts influencing the other heroes, and helps them shape their own ideas of heroism outside of their own motivations. He gains so much love from the people of Sternbild because he is always there when they need him, even if it’s just to catch a runaway balloon. The series sets him up as a one-man revolution in his way of thinking, and that revolution spreads throughout the first and second seasons in a way that’s steady and exciting, while also framing it as exactly what the hero world needs. 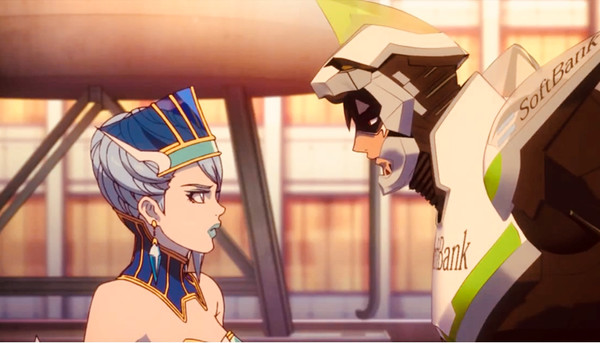 The world Tiger & Bunny sets up is a surprisingly realistic one. It presents a scenario where heroes are owned by corporations (specifically media companies), and asked to compete against each other for fame and sponsorship. It treats heroism as a spectacle rather than a good deed, and asks the audience if it really matters that the motivation behind having heroes is greed since the heroes are still saving people. It provides a number of viewpoints, motivations, and types of heroism, and ultimately asks the audience what a hero is, particularly in societies fueled by capitalistic success and the promise of fame. The exploration of these themes is ultimately what sets Tiger & Bunny apart from most superhero media, and it’s amazing how well they managed to weave the ideas of heroism, fame, and capitalism together to create a love letter to genre that also manages to critique its validity in a world not so different from our own. Will HIDIVE Be Able to Compete Against the Megacorps? – Answerman Anime