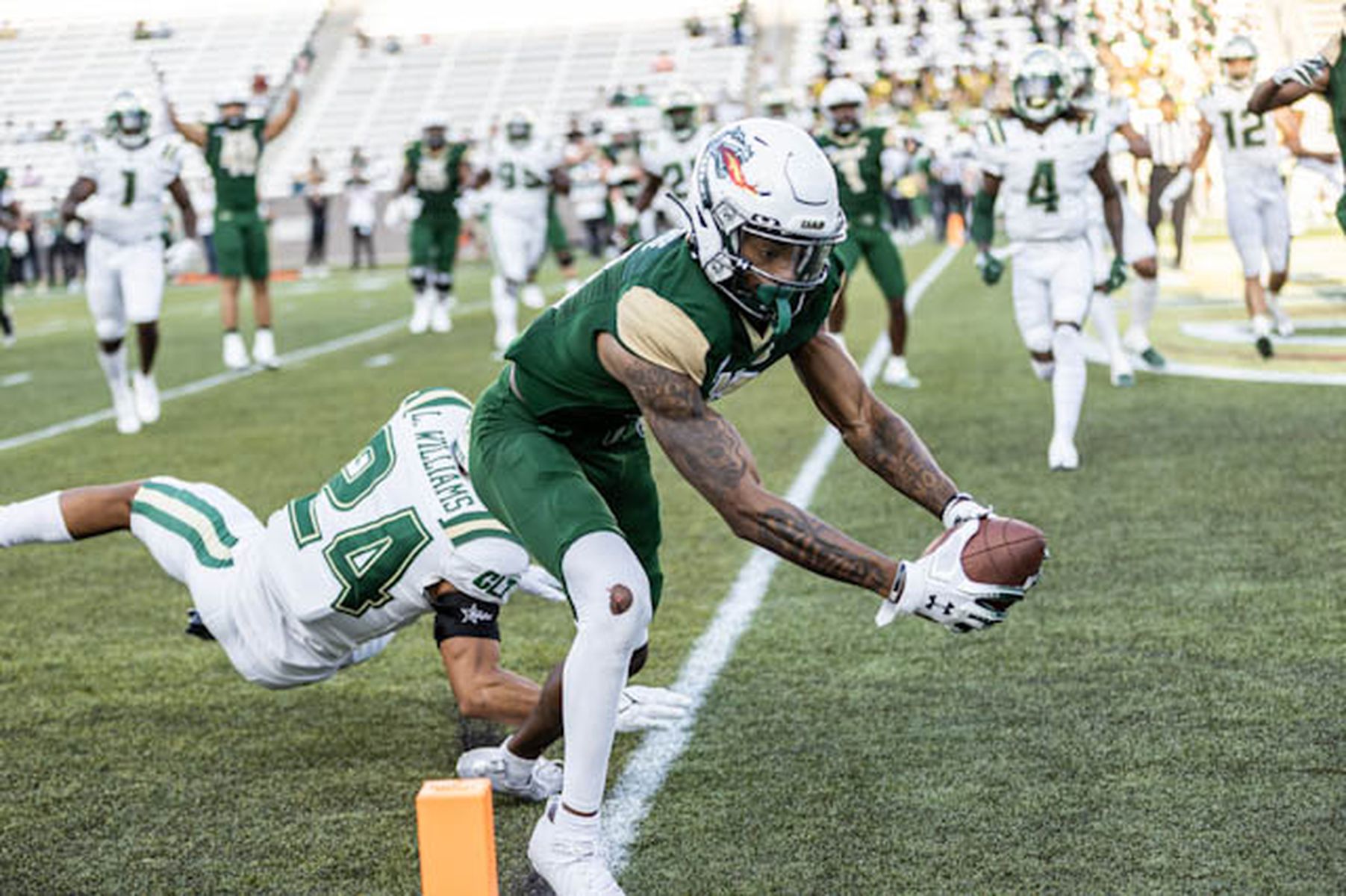 UAB safety Grayson Cash set the tone for the second half with an interception on the first play and sealed the deal with another pick on the opponent’s final opportunity of the game.

The Blazers got off to a rocky start but got back on track in the second frame in bullying their way to a 34-20 victory over Charlotte, Saturday, Oct. 15, at Protective Stadium in Birmingham.

The announced attendance for the game was 22,101 as UAB improves to 4-2 overall and 2-1 in league action.

Trea Shropshire and Tejhaun Palmer led the receiving effort, both bringing down 3 catches in the game and combining for 89 yards. T.J. Jones added 2 catches for 59 yards, Fred Farrier II had 2 receptions for 24 yards and Samario Rudolph had a clutch 35-yard reception on UAB’s first drive of the second half.

Defensively, UAB held the 49ers to 321 total yards of offense and a 3-for-10 performance on third-down conversions. The Blazers collected only a single sack but forced three turnovers with Grayson Cash securing two interceptions. Noah Wilder had 11 tackles, moving him into seventh place on UAB’s all-time tackles list (284), and Jaylen Key had 8 tackles and a forced fumble.

Coming off an impressive offensive outing last week, UAB chose to go deep on the first play from scrimmage and did not end well for the Blazers. Rather than checking down, Dylan Hopkins drove a pass downfield into double coverage, intended for Trea Shropshire, and was intercepted but Charlotte’s Geo Howard. The 49ers scored the opening touchdown three plays later, catching the UAB defense napping on a 60-yard pass from Chris Reynolds to Elijah Spencer.

The Blazers answered on their second possession, scoring on a 1-yard touchdown run by DeWayne McBride, but Matt Quinn missed a 48-yard field-goal attempt after UAB had 1st-and-10 at the 24-yard line of Charlotte. Hopkins took an unavoidable sack on third down, pushing UAB just inside Quinn’s threshold.

Charlotte took a 14-7 lead near the end of the first frame with Reynolds slicing up UAB’s formidable pass defense. The senior quarterback was 4-of-4 for 61 yards on the drive, dropping a 28-yard dime to Spencer on 2nd-and-19 and Shadrick Byrd capping the possession with a 2-yard touchdown run.

After falling behind 14-10 in the opening frame, UAB’s defense was roused from its first-quarter slumber. The Blazers forced Charlotte into a three-and-out on both of its second-quarter possessions, allowing only six offensive plays for 10 yards in the second frame.

UAB opened the second quarter with a 1st-and-10 at its 43-yard line and promptly entered Charlotte territory on a 22-yard reception by Trea Shropshire to open the frame. However, the drive eventually stalled and Hopkins was taken down for a 9-yard loss on 4th-and-Goal at the 1-yard line after a botched snap.

The Blazers forced their first three-and-out of the quarter on the ensuing Charlotte possession and cut into the lead on a 20-yard field goal by Quinn, capping a grueling 15-play, 50-yard drive. Charlotte was forced into its second three-and-out on the following drive and UAB ended the half with a 6-yard pass to Shropshire.

The defense did not fall back asleep in the second half, forcing turnovers on Charlotte’s first two possessions of the third quarter — an interception by Grayson Cash, who intercepted his second pass with 41 seconds left in the game, and a fumble recovery by Will Boler that was forced by Jaylen Key. The Blazers scored on each ensuing possession to take a 19-14 lead near the end of the third quarter.

Hopkins grinds away for another win

Despite throwing an interception on the first play of the game, Dylan Hopkins has a solid day in leading the UAB offense. He finished 15-of-23 for 231 yards and a touchdown, including the pick, and added 103 yards and a score on 10 rushing attempts.

Hopkins was efficient on third down, completing 3-of-5 passes for 28 yards and converting multiple times with both his arm and legs, and completed passes to seven different receivers in the game. He was unable to avoid an early sack but escaped pressure time and time again, including a 13-yard run on a 3rd-and-11 play and two straight runs for 34 yards to open UAB’s second possession of the third quarter.

The junior quarterback may have made the most important play of the game on a simple 7-yard run out-of-bounds at the 27-yard line as Charlotte was pegged with a late hit on the play. UAB scored on the next play on a 14-yard touchdown run by McBride and Hopkins connected with Shropshire on the 2-point conversion attempt to put the Blazers up 27-20 early in the final frame.

Interestingly enough, Hopkins almost was responsible for a turnover in the fourth quarter after the ball squirted from his hand before attempting to throw a pass. Given it’s the month of October, Hopkins could always blame a spooky ghost for the almost near-disaster.

While attempting to milk the clock in the final two minutes, Hopkins found an open running lane and scampered downfield 61 yards for a touchdown with 1:01 remaining in the game. Powerball jackpot at $610 million, 8th largest ever; when is the next drawing? Latest News