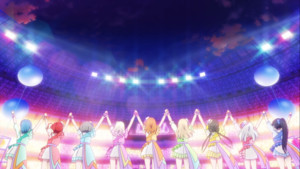 I mean, uh, ahem. Love Live! has been known for being GOD DAMN TEASE THA-

Er. Sorry. I’m calm. I’m composed. I went for a walk to get it out of my system. I’m an adult. I’m a professional.

As I was saying, Love Live! has been known for its love of melodrama since forever. It’s a franchise that adores big, loud, dramatic emotions. That’s often been a strength, as wearing your heart on your sleeve and swinging for the fences is basically all musical theater is about, and if done well it can leave a huge impact on your audience. I firmly believe that the franchise‘ penchant for treating even small character moments as revelatory epiphanies is the reason this series caught on as powerfully as it did. But it’s also been the achilles heel whenever the writing couldn’t back it up. So it was both a surprise and a genius choice for Superstar‘s season finale to restrain itself, and let the character writing speak for itself in the end.

Sure, there’s a big musical moment to punctuate it all, and we’ll get to that, but it’s striking how much of this episode is just…talking. That’s not a complaint at all, for the record. When there’s meaningful, important emotions at play, having characters actually talk to each other about it all is something I love to see. So many shows – including past Love Live! series – would have resorted to characters hiding their feelings or otherwise obfuscating things for drama, but instead we see honest to Honoka communication between not just the members of Liella! but even from Kanon’s family. Instead of building to a screaming or crying crescendo, it allows the work that’s already been done in establishing and developing these characters to do the heavy lifting, trusting that the audience doesn’t need a big bawling hug party to feel what the characters are feeling.

On its face that might sound boring, but it’s critical to making these characters feel real. Kanon is facing a genuinely huge question about her life and future, and the more grounded everything is, the more concrete it feels for the audience. And I love that, for as bittersweet as it is to see somebody you love leave, Chisato and everyone else fully recognize why it’s the right choice, and support their friend and leader when she decides to study abroad. I also was elated when Kanon insisted they not disband or rename Liella! when she’s gone. Much as I get the sentiment behind ending µ’s after the 3rd years graduated, it always felt a little like a premature ending. Maybe I’m just too used to bands going on despite massive roster changes (hey there Fleetwood Mac) but totally scrapping what you had before because your group has gone through changes just struck me as weird. So Kanon urging them all to keep that name and the group as a whole going was possibly my favorite moment in the whole finale.

And while the actual dialogue holds off on the over-the-top schmatlz, the concluding (and predictably victorious) swan song of the season decidedly does not. “Mirai no Oto ga Kikoeru” is a full-on ballad that toes the line between a farewell message to Kanon and a straight-up love song, carried by some fantastically sublime instrumentation. I’m especially fond of the opening instrumental which nearly sounds like something produced by Tom Wilson. Maybe that’s my ears playing tricks on me from listening to too much Nico lately (no, not that Nico), but it’s stuck in my head and I kind of love it. I’ll probably never be a fan of this franchise‘s flavor of pop, but when they go for show-stopping ballads they can absolutely nail it – especially with Liella!’s vocal lineup. A part of me thinks it’s a little strange how foregone our girls’ victory is, but this is ultimately meant as a sendoff to our main character. In that regard, it’s a wonderfully sweet, even somewhat somber goodbye, and the perfect way to send Superstar into truly uncharted territory at the same time.

And then the last 30 seconds happened.

Youuuuuuuuuuuu fuckers. You absolute goddamn sonsabitches. I bet y’all were patting yourselves on the back and popping champagne at Sunrise when this episode aired. You really pulled a fast one, huh? Really, it’s my fault. This same writer/director duo used the exact same bait and switch at the end of School Idol Project season two! They were already remixing that series’ first season finale, so why the hell wouldn’t they pull a Big News rug pull right when I was wiping away my tears? And now instead of just a send-off movie, we’ve got a whole ‘nother season coming, meaning we’re going to be left on that goddamn cliffhanger for MONTHS. Maybe YEARS depending on the production timeline on that Yohane fantasy AU spinoff. What the FUCK?

So now instead of a nice and tidy conclusion, I have a million questions about where we go from here. Yes, an unprecedented third season’s been announced, but like…we just had a whole goodbye arc to Kanon. I get you don’t want to put Sayuri Date out of a job while the rest of the group keeps on trucking, but it would be a stunning narrative fumble to just toss her back to Yuigaoka after all that. So I have to believe there’s some sort of twist to this – especially with the announcement that they’re holding auditions for a new member (singular, apparently) for Liella!. Maybe Kanon isn’t going overseas, but won’t be able to keep up School Idol duties? Maybe the Vienna school has inexplicably founded a campus in Japan. Maybe this was all a trick to test Kanon’s character, and she’s being scouted for a Space idol group like the end of KND. Whatever it is, none of us are going to get answers for the foreseeable future.

Outside of that last-second punch to the kidneys though, this has been an absolutely exemplary season for Superstar. It picked up where the first season left off, and has just kept running for its whole runtime. The new cast now feel so perfectly mixed in it’s hard to imagine they weren’t always there. The drama for both new and returning cast has managed to keep its impact without ever tripping like past storylines. It introduced the most effective rival character in the whole franchise. And it did all that while also breaking new ground to continue this story beyond the established structure. Superstar, especially this season, has well and truly cemented itself as the peak of the franchise for me.