The game will have a concept of “I have the lead role,” where players can create their characters and do activities like performing at a musical show and walk off the runway.

The game will also reveal a new character, a mysterious princess named Himeme who slept for 1000 years at the Princess Garden. The renewal’s main characters include Chimumu (who was previewed in Waccha PriMagi! anime’s finale) and the anime’s lead Myamu. 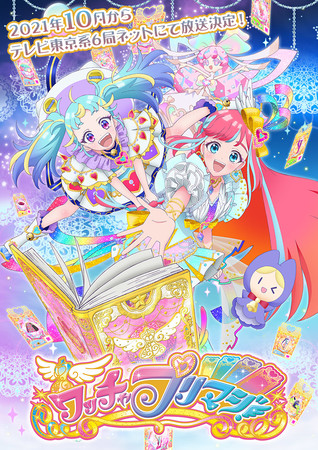 The game’s accompanying anime is the latest television anime in TAKARA TOMY A.R.T.S and syn Sophia‘s Pretty Series franchise, and it ended on its 51st episode, which aired in Japan on October 9.

The anime premiered in October 2021, and HIDIVE is streaming the series in the United States, Canada, the United Kingdom, Ireland, Australia, New Zealand, Latin America, Scandinavia, Spain, and Portugal. Sentai Filmworks licensed the series, and it will release the show on home video.

Hitsuji Tsujinaga launched the manga adaptation of the series in Shogakukan‘s Ciao magazine in September 2021. The magazine’s October 2022 issue revealed that the manga series is nearing its climax.

The Waccha PriMagi! series continues the franchise‘s conceptual motifs of song, dance, and fashion, and it also adds the theme of magic. Middle-school first-year student Matsuri Hibino loves festivals, and she dreams of one day being able to star in “PriMagi,” a magic-like form of stage entertainment borne from song, dance and fashion. That day arrives when the hyper-spirited, trouble-making magician Myamu arrives from the magical realm and scouts Matsuri for PriMagi. Together, the two compete with rivals to rise to the top of PriMagi.