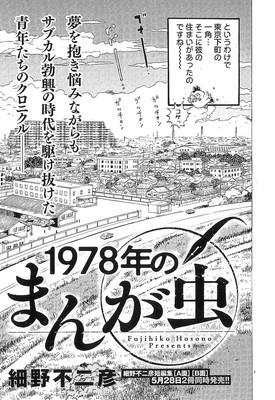 The November issue of Shogakukan‘s Big Comic Zōkan magazine published the final chapter of Fujihiko Hosono‘s 1978-nen no Manga Mushi (The Manga Insects of 1978) manga on Wednesday. The manga’s one compiled book volume will ship in December.

The autobiographical manga centers on the titular year of 1978, when manga and other subcultures flourished in Japan, and an important year in Hosono’s own life (Hosono debuted as a manga artist not long after).

Hosono launched the manga in Big Comic Zōkan in April 2021.

Hosono launched the Buddy Dog manga in Big Comic in 2017, and ended the series in October 2020. Shogakukan published the manga’s 11th and final compiled book volume in December 2020.

Hosono serialized the original Sasuga no Sarutobi manga from 1980 to 1984 in Shogakukan‘s Zōkan Shonen Sunday magazine. Shogakukan published the seventh and final compiled volume in July 1984. The series inspired a 69-episode television anime beginning in 1982. Hosono (Crusher Joe) launched the Sasuga no Sarutobi G manga in Monthly Hero’s in June 2017. The manga ended in September 2019.

Hosono most recently launched the Koi to Gebaruto (Love and Political Violence) manga in Kodansha‘s Comic Days manga website and app in September 2021.