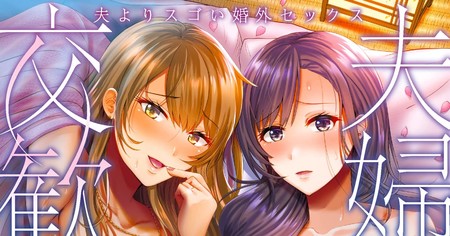 Suiseisha announced on Friday that Peter Mitsuru’s Fūfu Kōkan: Otto Yori Sugoi Kongai Sex (Marriage Exchange: Amazing Extramarital Sex Compared to My Husband) adult manga is getting an AnimeFesta (formerly Anime Zone and ComicFesta Anime) adaptation that will air on TV and will also stream online. The anime will be titled Fūfu Kōkan.

The manga centers on two married couples who have been friends since their days as students. The two couples go to a hot spring together as a double date, and by accident get wrapped up in a “marriage exchange.”

The manga’s one compiled volume will release on November 18.

The AnimeFesta anime programming block debuted in April 2017 and has changed names several times. Most of the anime series have two different versions: a “broadcast” version (the censored version broadcast on TV), and a “premium” uncensored version distributed online. WWWave Corporation runs the programming block, and the company releases many of the anime in English on its Coolmic website.