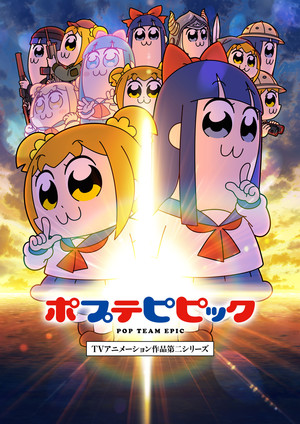 The anime premiered in Japan on October 1. Crunchyroll is streaming the anime as it airs in Japan, and it describes the series:

Crude, rude, and a little…cute? Get ready for the larger-than-life attitude of Popuko and Pipimi, the small and tall stars of Pop Team Epic! Based off the bizarre four-panel webcomic by Bukubu Ōkawa comes a comedy that’ll throw you off with its out-there jokes and intense absurdity. You think you’re ready for these girls? Think again, F#%**er!

The first television anime series premiered in January 2018. HIDIVE, Funimation, Crunchyroll, AsianCrush, and Amazon Prime Video all streamed the anime as it aired in Japan. Adult Swim‘s Toonami block began airing the series in June 2018. Funimation released the anime on Blu-ray Disc in North America in October 2018. Netflix began streaming the anime in the United States in February 2020, but originally with only half of each episode available. Netflix has since reuploaded the full versions of each episode.

The original anime’s full episodes are each 23 minutes long. Each episode has two main parts with much of the same content. The two parts have different voice actors, as well as some different content such as altered jokes.

The anime adapts a surreal four-panel manga by Bkub Okawa that centers around two 14-year-old girls, the short Popuko and the tall Pipimi.