The official Japanese website for the animated adaptation of Kaisei Enomoto‘s Yowai 5000-nen no Sōshoku Dragon, Iware Naki Jaryū Nintei (A Herbivorous Dragon of 5,000 Years Gets Unfairly Villainized) novel series began streaming a promotional video for the Japanese-dubbed version of the series on Friday. The dub reveals the series’ two main cast members: Houchu Ohtsuka as the herbivorous dragon, and Aoi Yūki as Reco. 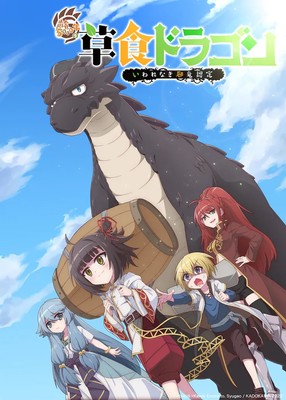 The Japanese dub will premiere in January 2023.

The novels center on a harmless vegetarian dragon. One day a young girl suddenly appears before him, and she has come as a sacrifice from her village, thinking him some great evil dragon. She believes that in exchange for her soul she will get the power to defeat the Demon Lord. The dragon tells a lie in order to be rid of her, but somehow this misunderstanding awakens magical powers within her. Thus begins the story of a dragon believed to be evil but is actually harmless, and a young girl with a big misunderstanding as they journey to defeat the Demon Lord.

LAN Studio produced the work, which premiered on bilibili on July 30. bilibili began streaming the series with English subtitles on August 1 with the title A Herbivorous Dragon of 5,000 Years Gets Unfairly Villainized.