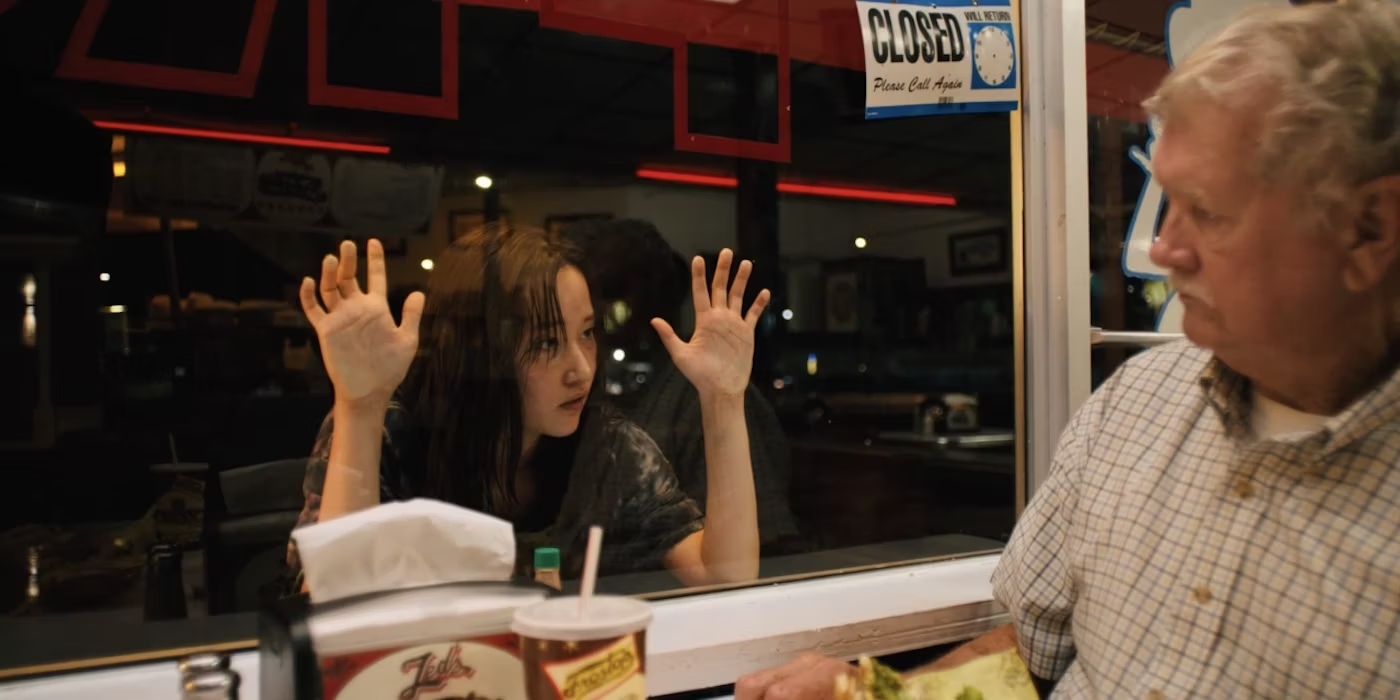 “Mona Lisa and the Blood Moon’

Rated R. On Digital and VOD.

A girl walks home alone at night in writer-director Ana Lily Amirpour’s latest, return-to-form outing “Mona Lisa and the Blood Moon.” In the first 15 minutes, Amirpour (“A Girl Walks Home Alone at Night”) reminds us why she is  one of our most talented filmmakers. The elements might be described as Tarantino 101: a young Asian woman (Jeon Jong-seo) in a straitjacket languishes inside a padded cell, there’s a bed with restraints, an abusive nurse (Lauren Bowles), a secret power the young woman possesses, blood. Those things, plus a marvelous score by Daniele Luppi (“Magic City”), invoking 1970s Italian B-movies, and a cast that kicks butt are the formula for an explosive, startlingly cinematic, opening sequence. The rest of the film does not disappoint.

We and Mona Lisa, clad in a loosened straitjacket and a pair of gifted-by-junkies high-tops, are off to the races. The Asian girl with the hidden superpower is headed to New Orleans to seek whatever. Like the lonely Iranian girl vampire in “A Girl Walks Home Alone at Night,” the protagonist of “Mona Lisa and the Blood Moon” is a true original. We don’t know anything about her except that her name is Mona Lisa Lee, that she ended up in a straitjacket and an “insane asylum for adolescents.” A policeman with his own exceptional traits named Officer Harold (the talented Craig Robinson) will soon chase after Mona Lisa. But first she is going to meet a drug-dealer/DJ named Fuzz (Ed Skrein, terrific in a role meant for Zac Efron). Some might take issue with Skrein’s depiction of Fuzz. But if it was OK with Amirpour and cast member Robinson, it’s OK with me. Fuzz gives Mona Lisa his shirt so she can lose the bloodied straitjacket. Mona Lisa then wanders into a strip club near Bourbon Street and teams up with Bonnie Bell aka Hunt (a delightful turn by Kate Hudson), a foul-mouthed, take-no-nonsense, slightly over-the-hill stripper, who lives with her bullied, heavy metal-loving, equally foul-mouthed and rebellious 11-year-old-son Charlie (a ridiculously good Evan Whitten, TV’s “Big Sky”).

Mona Lisa and Charlie are both fugitives, living lives they never asked for or wanted. “Mona Lisa and the Blood Moon” opens with a crazy-immersive shot of a swamp full of unseen noisy crickets, birds and frogs. The film is that swamp. You’re surprised by how it gets in your face and then gets into your head with the help of that fabulously jaunty Euro-trash score. Amirpour loves that camera move from Hitchcock’s “Vertigo” pulling the camera back, while turning the lens to focus in. She uses it to indicate Mona Lisa taking over a person’s mind. In a small role as the asylum receptionist (“That girl is a demon.”), Rosha Washington demonstrates how to be the film’s star for a minute and a half. Hudson’s Bonnie is a totally fearless, totally lovable, perhaps nutty warrior, who sees an opportunity to score in Mona Lisa and just goes for it. When Charlie gives mother Bonnie trouble and threatens to run away, her refreshingly incorrect response is, “There’s the door. Knock yourself out.” Robinson’s Officer Harold is a kind of modern-day New Orleans knight errant on a chivalrous quest (his horse is a cane). Mona Lisa and Charlie are innocents on a picaresque road full of dangers and high adventure. Of course, they will run into Charlie’s tormentors from school. The film’s motto is, “Forget What You Know,” a line from a fortune cookie. Officer Harold eats when we first meet him. The film, which can be seen on VOD now and at the Brattle starting next Friday, is dedicated to Amirpour’s deceased cousin, “the Charlie to my Mona Lisa.” Charlie teaches Mona Lisa how to dance without inhibition to heavy metal. The film gives us the same liberating opportunity. It’s music for goblins.