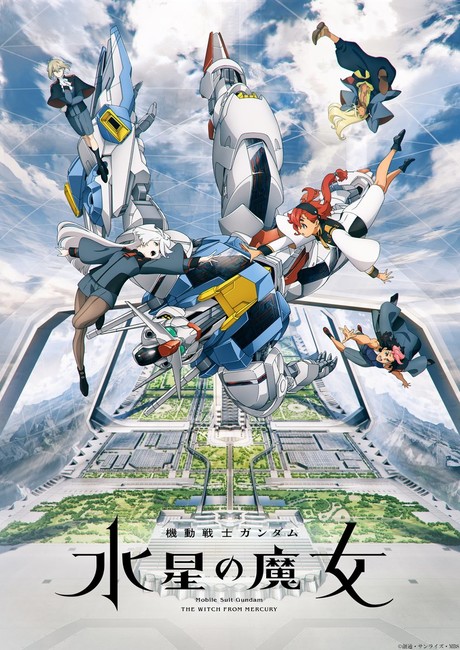 “Gundam isn’t aimed at us.” “If I see Gundam [in the title] I won’t watch it.” These were things Mobile Suit Gundam: The Witch From Mercury producer Takuya Okamoto heard from teens who visited Sunrise on a social studies trip. Those were shocking words, he told Akiba-Souken in a recent interview. It occurred to him that even Mobile Suit Gundam Seed is 20 years old now, so the teens who watched it then would be in their thirties now. The feelings of today’s kids furthered his resolve to make Gundam: The Witch From Mercury as accessible to their generation as possible.

According to Okamoto, even before he joined the project, the general idea for Mobile Suit Gundam: The Witch From Mercury was to be an entry point for the franchise to a new generation. Talks about a new Gundam set in an alternate universe from the Universal Century timeline started around 2018, and Okamoto personally came on board in 2020. He was told, “Make a Gundam with a female protagonist.”

Although other Gundam series in the past have featured schools, many stories were serious from the start, often focusing on child soldiers. Hearing that modern teens were alienated by this kind of plot was a wakeup call for Okamoto. From there, the staff discussed the idea of setting Gundam: The Witch From Mercury in a school. They hoped that the teen audience would be able to identify with characters who don’t personally feel impacted by large-scale political events at first. It is also notable that the TV series airs at a 5:00 p.m. time slot in Japan, so the staff felt that it was important not to make the beginning of the story too heavy. Nevertheless, Okamoto noted that the series has plenty of drama that can be appreciated by an adult audience too.

As for the female protagonist, Okamoto remarked that although there were some aspects of the character they were able to depict because of her gender, the staff was not particularly fixated on it. The idea was to portray her as simply a person. The word “witch” in the title has many different meanings, and its significance will become clearer as the story progresses.

Mobile Suit Gundam: The Witch From Mercury (Kidō Senshi Gundam: Suisei no Majo) is the first new Gundam television anime series in seven years, and the first main Gundam television anime series with a female protagonist. The anime premiered in Japan on October 2. The prologue episode for the anime aired on September 25 at 5:00 p.m. The anime will air its second cours (quarter of a year) in April 2023.