The Ghibli Park staff debuted new photos of the park’s Dondoko Forest (Dondoko Mori), Hill of Youth (Seishun no Oka), and Ghibli’s Grand Warehouse (Ghibli no Daisōko) areas, particularly showing recreations of the World Emporium antique shop from Whisper of the Heart, the Baron’s office in The Cat Returns, and Satsuki and Mei’s house from My Neighbor Totoro.

Ghibli Park will open on November 1. Ghibli’s Grand Warehouse (Ghibli no Daisōko), Hill of Youth (Seishun no Oka), and Dondoko Forest (Dondoko Mori) areas of the Ghibli theme park will open on November 1, followed by the Mononoke no Sato area (Mononoke Village, inspired by Princess Mononoke) in the last half of 2023. The Majo no Tani Area (Witch Valley, inspired by Kiki’s Delivery Service) will open in March 2024, delayed from its original planned debut of late 2023. The theme park will screen all 10 Ghibli no Mori no Eiga (Ghibli Forest Film) anime shorts, one after another. The 10 shorts were previously exclusive to the Ghibli Museum in Mitaka, Tokyo (except for rare event screenings). The shorts will play at the Cinema Orion theater at the Ghibli’s Grand Warehouse.

Inspired by the Japanese countryside in the Showa era, the Dondoko Forest area will feature a recreation of the shrine and path from My Neighbor Totoro — complete with a 5.2-meter-tall (about 17-foot-tall) wooden Totoro playground statue. Up to five elementary school children can enter the statue at a time.

The 9,600-square-meter (about 2.4-acre) Ghibli’s Grand Warehouse building will have about four times the floor space of the existing Ghibli Museum in Mitaka, Tokyo.

The Ghibli Park will contain a 6.3-meter (about 21-foot) long recreation of the airship in Castle in the Sky. A replica of the witch’s home in Earwig and the Witch will appear in the Majo no Tani area, along with a 956-square-meter (10,290-square-foot) brick-laid restaurant in an image of a storehouse on the park’s lakeshore. 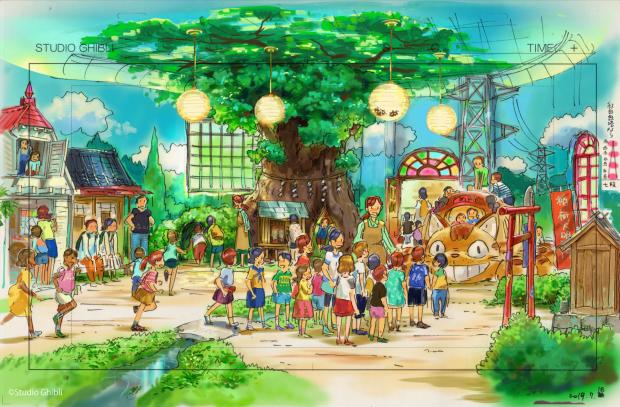 Construction contractor Kajima Corporation began construction of the first three areas of the park in July 2020. The park takes up about 7.1 hectares (about 17.5 acres) of the existing 194-hectare (about 479-acre) Aichi Expo Memorial Park, where the World Expo 2005 was held.

Aichi prefecture agreed in May 2017 to establish the park. The project’s planners then revealed the basic design plans in April 2018. The park was initially planned to open in 2020. Studio Ghibli and the Chunichi Shimbun newspaper jointly established the Ghibli Park, Inc. company that will be responsible for the management and operation of the park.

Aichi prefecture and Studio Ghibli are collaborating to open the park in a 200-hectare area in Nagakute, Aichi’s Expo Park, also known as Moricoro Park, the site of the 2005 World’s Fair. The park already has “Satsuki and Mei’s House,” a replica of main characters’ house from the My Neighbor Totoro anime film. The house was the site of a Studio Ghibli exhibition in both 2008 and 2015.

The prefecture is aiming to make the park an attraction for both foreign and domestic tourists. Both Studio Ghibli and the prefecture are funding the operating company that will be in charge of the park.

While the park is being developed, the construction will not cause damage to the park through felling trees or other methods.

Studio Ghibli also maintains The Ghibli Museum, located in Mitaka in west Tokyo. The Ghibli Museum has interactive exhibits and replicas of iconic Ghibli creations, and it offers a rotating screening of different Ghibli-animated shorts.