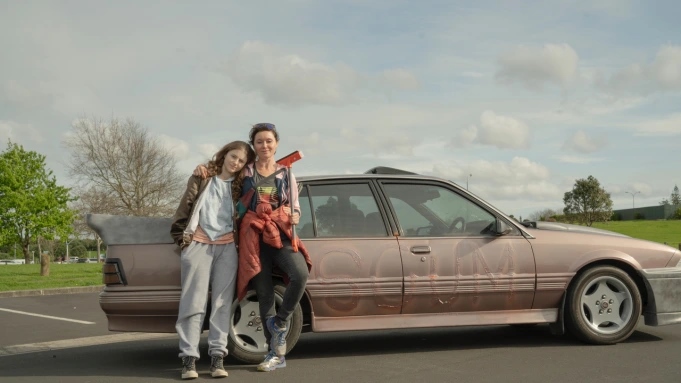 While Essie Davis remains best known as the glamorous, stylish 1930s sleuth in the long-running “Miss Fisher’s Murder Mysteries,” she now embraces one of the most challenging roles of her career with “The Justice of Bunny King.”

Bunny, a mother hoping against hope to secure a house so she can be reunited with her two young children, is at the mercy of New Zealand social services. She earns a little money standing in traffic washing motorists’ car windows.

But while Bunny may be down, she’s not out.  As Davis, 52, noted in a Zoom interview from Tasmania, where she is now living, “This wasn’t written for me, it was brought to me and I just loved her buoyancy and optimism in the face of constant setbacks.

“While being pushed down she kept getting up, fighting for herself, her children and her niece (Thomasin McKenzie) again and again. With such optimism, humor and joy. I was just lucky. It was a great role.”

Before filming, Davis did four months’ research, watching documentaries about New Zealand’s social services system, mothers in prison and the separation of mothers from their children.

“It was really important to me that Bunny was her own person. I don’t want people to not see the film because it’s about dark subjects. It’s a heart-wrenching film but because it has so much humor and joy and because she’s such an optimistic person, watching the film should be an experience where you become like arena football fans. You’re going, ‘Come on Bunny! You can do it!’ Because she believes in herself.”

“Justice” has drawn comparison to the films of Ken Loach, England’s compassionate chronicler of social issues.

“It is definitely about a social issue that just happens to have a great cast to take you through it,” Davis declared. “It’s (Loach’s) ‘I, Daniel Blake’ meets ‘Thelma and Louise’ meets ‘Dog Day Afternoon.’

“A story about women on the edge of poverty, about surviving abuse and standing up for yourself. It speaks for the thousands of women who are finally being heard and maybe listened to with compassion.

“Hopefully, it might make you question your judgment about what a woman with children in foster care is. Whether she’s a good person or not.”

As for a possible return from Miss Fisher and her murder mysteries, “Never say never,” Davis said with a laugh.

“It’s been a while and storytelling needs to always provide something new.

“But I find Phryne such a positive, able, intelligent, wonderful role model with fabulous skills. A glorious, naughty character. So, maybe, one day, down the track.”

“The Justice of Bunny King” is available on demand Sept. 30.